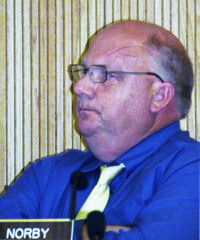 By Miriam Raftery
May 13, 2012 (San Diego)—San Diego’s Planning Commission voted unanimously to have staff evaluate health impacts of wind turbines on people and wildlife. Commissioners balked at approving a proposed county wind ordinance or changes to the Boulevard community plan that could make it easier to gain approval of large-scale wind projects—taking the sails out of the wind industry.
“I am not willing to put this whole community in danger or change that community plan. I would like to bring this whole consideration to a grinding halt right now,” declared Commissioner Peder Norby after hearing evidence of health hazards that turbines pose to people and wildlife. Norby proposed that Commissioners demand that the Environmental Impact Report be reopened to evaluate solar as an alternative to wind energy.
By a unanimous vote (with Commission Adam Day absent), the Commission asked staff to come back on Friday, May 19 with details on the ramifications of reopening the EIR. They also ordered staff, which previously evaluated only  “annoyance” aspects of wind power, to examine the health impacts posed by wind turbines to people and animals. Planners also showed interest in small scale turbines for individual property owners, including vertical access models.
San Diego County has 807,000 acres of designated “wind resources” including 39,000 acres suited for wind farms. Those numbers don’t include public lands or tribal lands, both of which have been seeing a flurry of wind projects proposed.
While the southeast area of the county has the most viable wind resources, parcelization of residential lots makes it problematic. Now the industry is eyeing six wind resource areas north of Interstate 8 in East County for potential wind development.
So is staff. “These areas seem more viable,” a staff member told Commissioners.
Commissioners voiced outspoken concerns after hearing testimony from health and noise experts. 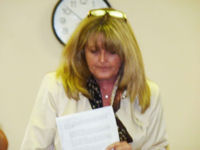 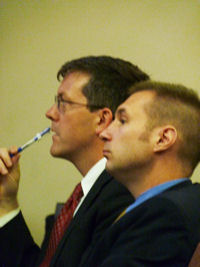 One company with a lot riding on the commission’s decisions is Iberdrola Renewables, which received approval from the Bureau of Land Management for its Tule Wind project in McCain Valley. But the company still needs County approval for five turbines as well as roadway access, water and other issues.
An Iberdrola Renewables representative and a CH2M Hill expert brought by Iberdrola sought unsuccessfully to persuade commissioners that “low frequency noise at wind projects is not an issue.” One insisted that blade “swish” is not low frequency; the other claimed that “wind turbines are not impulsive noises.”
An Enel Green Power representative expressed willingness to work together to try and resolve differences.” She said the ordinance would create “uncertainties” and insisted that a 1,000 to 1,500 setback from homes would be adequate. Others disagreed, citing harm to residents living several times that distance away from the turbines.
Mark Ostrander of Jacumba said he installed a 30-foot-high 1.2 kilowatt vertical axis turbines for $7,000. “It works in wind in any direction,” he said, adding that he has not had any health issues nor any bird kills. With wind alone, he produced about half of his own power; he has since added solar photovoltaics and is now producing more power than he uses. One planner asked if vertical axis turbines could be required in some circumstances.
“Distributed need is far better than transmission needs,” he said.
EDM editor Miriam Raftery voiced concern that there is anecdotal evidence that some livestock has experienced higher rates of miscarriages, stillbirths and birth defects than normal. “Are these safe for pregnant women?   We don’t know,” she concluded, also suggesting that the board consider a moratorium on wind projects.
El Cajon builder John Gibson with Hamman Construction said the wind projects would create jobs. He suggested that 93,000 should be given “endangered species” status.
Tisdale late noted that Gibson failed to disclose his “vested interest” in Tule Wind, Sunrise Powerlink and more.
Commissioners engaged in a vigorous discussion. Commissioner Michael Beck asked about bird and bat kills.
Staff indicated no studies have been done on residential-scale turbines, but added that finding such evidence on private property could be problematic.
Commissioner Bryan Woods asked, “Are we going to look into medical issues and even though it opens a Pandora’s box, should we?” He added “You’d hate to craft this thing and then have people get sick….If you ignore it you are negligent, and I don’t want to be negligent.”
Commissioner Norby said he used to live in Denmark, where he had a home powered by offshore wind, while in Carlsbad his home has been powered entirely by solar. “Here we have a 100% capacity for solar,” he said, adding that he found the EIR’s narrow scoping to include only wind “troubling.”
Commissioner John Reiss said that some who testified were “not very credible” while others were compelling.  He voiced support for setbacks of 1500 or more, but stopped short of sending the matter back to Supervisors without taking action to move forward on a wind ordinance.
Norby agreed that ultimately the decision will lie with Supervisors. But he concluded, “It’s premature to unleash this right now. He called for inclusion of solar in the EIR.

Beck agreed. Then a vote was taken. As the results were read aloud, cheers erupted among residents who were present—while the wind industry representatives looked decidedly deflated at the decision.

Some of the industry's fraud pertains to the claims about these monsters helping to solve climate change and the melting polar caps. This is one of the industry's primary selling pitches. But these turbines can do nothing for the ice caps. They can not supply enough energy to offset any other energy source and they do nothing for the primary contributing factors for climate change. That being deforestation and topsoil loss.

These turbines are however a highly profitable product for industry and saving the world is nothing more than a devious hook used to sell them. If industry was truly committed to saving the world and these really were the answer, profit would be the least of the industry's worries. I think people are also beginning to understand that when a greedy profit driven industry that routinely rigs studies, believes the killing of thousands of eagles is justifiable collateral damage, hides the mortality of millions of protected birds, uses gag orders in contracts and then starts telling the public it is good for you, they had better run like hell. I do not know if the people of San Diego or Imperial Counties are aware of this but there is another major wind turbine fight going on at this time in Goodhue County Minnesota. Landowners that signed contracts there were not told about the true impacts from their projects, especially what was coming to their beloved Bald Eagles. The community and landowners are telling the developers to basically put their turbines ...... you know where. There may be a court battle. If so the industry's dirty laundry and all their bogus research will be plastered all over the country. Now that the lies are coming out, an environmental movement has started. It is worldwide and growing at a rapid rate.

Hallelejah! It looks like a ray of sunshine has finally broken through the political fog that's been clouding the truth about these hideous wind farms.

Let's keep our fingers crossed and hope that the County Planners remain on the side of the "permanent things"--not intellectually trendy, environmentally catastrophic economic flops like "wind farms."