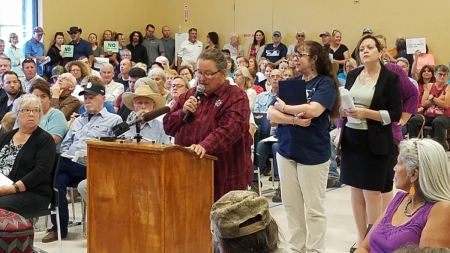 October 12, 2018 (Lakeside) -- Members of San Diego County’s Planning and Development staff bravely faced some 500 irate Lakeside residents at a recent loud and often rowdy standing room only meeting at the Lakeside Community Center over a proposed sand mine project at the El Monte Valley.

The meeting came on the heels of a controversial draft Environmental Impact Report (EIR) released by the County on the possible environmental effects the sand mine project might have directly on the Lakeside community and on the adjacent cities of Santee and El Cajon.

The County has solicited its draft report for public review and comment from August 30th through October 29th. (The report and other documents related to the project can be accessed here.)

The sand mining project is slated to occur on 228 acres of a 480 acre parcel of land between El Monte Road, 2500 feet east of Lake Jennings Park Road, 6300 feet west of El Monte County Park, and some three miles west of El Capitan Dam, including the areas where the digging will take place, trails, and a “drop structure” to control water flows. The project will involve digging up to 100 feet into the San Diego River riverbed to harvest roughly 12 million tons of sand a year.

The meeting, which lasted for nearly three hours, involved speaker after speaker who denounced the project, some using their allotted comment time to rally the audience against the project. At another point during the meeting, a speaker called out the owner of the land, Bill Adams of El Monte Nature Preserve, LLC, the mining company operator who was present at the meeting. (photo by Billy Ortiz, Outlaw Photography: Adams, far right)

“We’re going to stop you. We’re going to stand in front of your trucks and we’re not going to let you through. You’ll have to run over my body,” said one speaker. Another speaker raved, ““I don’t know if you noticed, but the whole town of Lakeside is here.”

The speakers at the meeting were supposed to speak only for two minutes apiece, largely ignoring County Planning Department project manager Ben Nelson’s plea for “no applauses and no booing.”

“We understand this is a highly controversial project,” he said, to which a loud woman’s voice at the back of the large community room retorted, “You’re two years late with the report. You need to hear what we have to say.”

Another speaker, identified as Lynne Collier, who lives on Vista Del Capitan Road directly near the proposed project said, “Many of our homes are directly down in the valley and will be 100 percent impacted by this project,” she said.

Some of the speakers expressed their concern that the sand dredging would affect the water table and possibly dry up nearby water wells, something which has already allegedly occurred. “Without well water, we cannot keep the horses, the pigs, the cows, never mind the people,“ she said.

Anger was also directed toward Michael Beck, who has two environmental organizations, Endangered Habitat League and Endangered Habit Conservancy, involved with the restoration of sand mines at Hanson Pond, near the proposed El Monte project. Beck is also a member of the County Planning board. Some residents at the meeting put out calls for Supervisor Dianne Jacob to ask Beck to resign. He is said to be purchasing land in the area through one of the non-profit organizations with various grants, public funds and donations and is using the other to restore the land. Beck allegedly has partnered with El Monte Nature Preserve to secure a contract to restore the project land after all of the sand has been extracted in 16 years.

According to a fact sheet distributed at the meeting, the actual mining project would go on for 12 years, with four years need to complete the restoration and revegetation 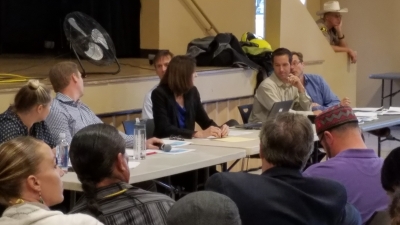 of the land used for the project.

“The only way that we would be providing and selling water to the project is if the boundaries change and it wouldn’t make sense since it could cost millions to do that,” says Sander.

“The project can either engage the Helix Water District or the City of San Diego to purchase water,” says Sanders. “But we will not be selling water to the project, in spite what the County is saying in their reports.”

Hillaker said that opponents have been hounding the board at scheduled public meetings to oppose the project, based on erroneous information included in the County’s EIR.

Sanders says he will be addressing the erroneous information in a Lakeside Water District meeting in two weeks.

The parcel of land proposed for the sand mining project was sold to El Monte Nature Preserve, LLC for $8 million dollars by the Helix Water District. Before the sale, it said it was hoping to extract some 18 million tons of sand used to make concrete. After the virgin sand has been extracted, the valley would be restored with recreational trails, a water pond, and habitat for native species.

The State of California has determined that the land is a critical resource for sand because of a shortage of high-quality sand in the county.

In an interview with the San Diego Union-Tribune published last year, Adams said, “We intend to work with the residents of Lakeside to complete trail systems and public access accommodations to be available on the property during and following the anticipated mining and restoration operations.” 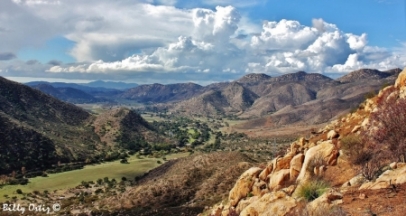 gest impact, according to the report, is that the project will unavoidably and irrevocably impact the scenic vistas and resources of the area. (Photo, right, by Billy Ortiz, Outlaw Photography.) The area is home to several endangered and threatened species, including more than 23 Glossy snakes, Least Bell’s vireos, California gnatcatchers, golden eagles, bald eagles, and Quino Checkerspot butterflies that cannot be found anywhere else in the world.

Enviornmental groups including Cleveland National Forest Foundation and Lakeside River Park Foundation have voiced concerns over the project and spoken with residents about mounting a possible legal challenge in the future.

Traffic and noise are additional concerns. The project would generate an estimated 150 truck trips daily from 7 a.m. to 5 p.m. weekdays and from 7 a.m. to 1 p.m. on Saturdays.

But the key major concern over the project expressed by speakers throughout the evening came from a section in the County’s EIR that although that the owner of the project will be required to take steps to minimize negative impacts to air quality, disturbing the surface soils could increase the incidence of exposure to Coccidioides spores – more commonly known as “Valley Fever” near the immediate vicinity of the project and surrounding communities.

According to the U.S. Government Center for Disease Control, Valley fever is an infection caused by a fungus (Coccidiodes) that lives in the soil. About 10,000 cases are reported in the United States each year, mostly from Arizona and California. Valley fever can be misdiagnosed because its symptoms are similar to those of other illnesses. Valley fever does not spread from person-to-person, however, can significantly affect individuals with autoimmune diseases such as celiac disease, diabetes mellitus type 1, Graves' disease, inflammatory bowel disease, multiple sclerosis, psoriasis, rheumatoid arthritis, and lupus.

The symptoms are often fatigue (tiredness), cough, fever, shortness of breath, headache, night sweats, muscle aches or joint pain, skin rash on the upper regions of the body and legs.

According to Grossmont Hospital Emergency Room Director Julie Phillips, MD, most people are not typically physically affected by Valley Fever when the spores are kicked up into the air in clouds of dust. “Honestly, it is very rare that we have treated people in the Grossmont emergency room from Valley Fever,” she says. “Most people handle the fungal spores really well and at the most only go through quickly treatable mild infections. But it can be a totally different story for people with serious autoimmune diseases,” she continued.

Many people who are exposed to the fungus never develop symptoms of the illness, but the symptoms of Valley fever can be similar to those of other common illnesses. That, by itself, may cause patients getting delayed in being correctly diagnosed and treated with anti-fungal medications.

Patients with severe lung infections or infections that have spread to other parts of the body always need antifungal treatment and may have to stay in a hospital. Rarely, Valley Fever can lead to meningitis and can be fatal, according to the U.S. Centers for Disease Control’s Valley page on treatment of the disease. 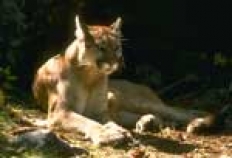 In 2017, 7,466 new cases of Valley Fever were diagnosed in California, the highest year on record the California Department of Public Health reports. Nationally, the CDC reports an average of 200 human deaths per year from Valley Fever. Many domestic animals including dogs, cats, horses, cattle, and llamas can contract Valley Fever as well as wildlife species found in the El Monte Valley ranging from skunks to cougars, according to the University of Arizona Health Sciences.

Dr. Roland Wolkowicz, PhD., a widely-recognized San Diego State University professor and scientist in virology and microbiology, says. “It is difficult to get the number of cases with this disease because its symptoms are similar to other inflammatory diseases of the respiratory tract,” Wolkowicz says.

He continued to say that the fungus exists in the first two-to-ten inches of soil. The spores will release in the air the more dry the air is. “The more dry the air is, there is more chances that these particles are transported by the winds. With climate change, you have higher temperatures. In Riverside County, where it is more prevalent, the problem will be more prominent,” Wolkowicz continued to say. “When it is disturbed by humans – by construction or whatever – the spores are released into the air.” 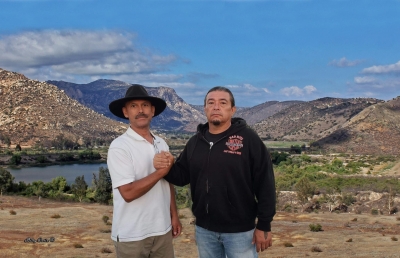 Besides the increased traffic and environmental health concerns raised by the project, the most formidable challenge that the project could face now are cultural and historical concerns being raised by the Barona and Kumeyaay native American tribes which inhabited the area. They say it is a spiritual area for the tribes which still has numerous artifacts and burial sites.

Bobby Wallace, a member of the Barona Band of Mission Indians told the crowd, “There’s going to be some of my people, my relatives, my family stuff that is going to be lost at the end of this. Somebody to come in and is going to start digging it up and tearing it up is disrespectful to me, and disrespectful to all tribes,” he said. (Photo, right, Bobby Wallace and Billy Ortiz, photo by Billy Ortiz, Outlaw Photography)

According to activists Ana Nita and Wallace, the El Monte Valley is considered to be sacred Kumeyaay and Barona land. The tribes were removed from the land before the El Capitan Dam and Reservoir Lake was built in 1935. “The tribe split in two and was relocated in Barona and Viejas and had to start over on a bare land. The people of the Hokan stock lived in these areas for over 10,000 years before Europeans came,” Wallace says.

Kudos to Paul Kruze and ECM. OUTSTANDING report on this important meeting! We can't let up on these people. Keep up the good work! C. Barranco