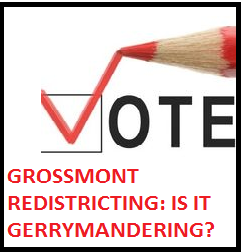 Updated March 31 with new info from the County Office of Education.

March 15, 2016 (San Diego’s East County) – The County Committee on School District Organization will hold six hearings to get public input on the Grossmont Union High School District’s proposed shift to electing governing board trustees by districts.  The GUHSD board voted 4-1 to adopt a controversial map and seek a waiver of a public vote despite opposition from members of the public who spoke, some alleging gerrymandering to oust a dissenting board member and break up a vocal minority voting block, as ECM reported.

The six hearings are set for March 17 in La Mesa, March 28 in El Cajon,  April 4 in Alpine,  April 5 in Jamul, April 6 in Lemon Grove, and April 11 in Lakeside.  The public can testify at the meetings and also submit written comments up until April 7.  The County’s committee will vote to approve or disapprove the district’s request at its April 13 meeting. The Alpine hearing was added after ECM and community members asked that Alpine be added as a location due to the many controversies involving the Alpine area.

For the full schedule of meetings, rules and details, click "read more" and scroll down.

To view data on the GUHSD redistricting plan including demographic details and maps, click here.

The recording secretary will tape-record the entire meeting.   Prior to the opening of the public hearing, participants will be asked to provide their names and  addresses on an attendance sheet. The completion of the document is voluntary, and all persons  may attend the meeting regardless of whether a person signs the sheet.

Persons wishing to address the County Board must complete a blue speaker registration card, indicating whether they wish to support or oppose the proposal. Alternatively, a pink information card may be used to submit comments and/or indicate support or opposition in writing.

The President of the County Board of Education, acting as the County Committee on School District Organization, shall announce the opening of the public hearing and ask all those present and  desiring to speak for or against the proposal to turn in a completed speaker card to the secretary.  Speaker cards will also be collected during the hearing.

1. The order of speakers will be as follows:

Individual speakers called from speaker cards in the order submitted

2. The designated spokesperson(s) for the school district shall have 10 minutes for an initial presentation.

3. Individual speakers shall have up to 3 minutes to present testimony. The Board President may reduce the time allotted to each speaker based upon the number of requests to speak.

Speakers shall direct all testimony to the County Committee. Individual speakers will be requested to limit remarks to new information regarding the proposal and will not be permitted to cede any of their allotted time to another speaker.

4. County Committee members may address questions through the President to any speaker.

5. When all persons desiring to speak on the proposal have been heard, the President shall declare the public hearing closed.

Written information submitted for the County Committee's review must be provided to the CountyOffice of Education no later than 5:00 p.m. on Thursday, April 7, to ensure distribution to committee members and the school district at least 24 hours prior to the April 13, 2016 meeting.

An East County reader sent us the following remarks in an e-mail: “I was at the county board meeting yesterday and they are definitely concerned with the lack of public input in the process so far. They mentioned your article and made it clear they will be questioning Grossmont about it at these hearings.”