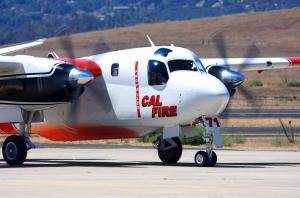 April 23, 2013 (San Diego)--The county Board of Supervisors on Tuesday (4/23) urged federal lawmakers to approve pending legislation in Congress that would save the Ramona Airport traffic control tower. The board, on a 5-0 vote, endorsed a pair of bipartisan federal bills that would halt the June 15 closure of the East County facility, along with nearly 150 other towers funded by the Federal Aviation Administration.

The FAA announced the closures earlier this year, citing sequestration. Supervisors Dianne Jacob and Ron Roberts are leading local opposition to the move, stressing that the Ramona tower is critical to public safety. Air traffic controllers coordinate the movement of Cal Fire tankers and other firefighting aircraft based at the airstrip.

“San Diego County is wildfire country so it’s critical that the tower remains open,” said Jacob, the board vice-chairwoman. “I urge Congressional lawmakers to right this wrong and to keep the public safe.”

The control tower was established in response to a 1995 incident in the San Diego County backcountry, in which three people died in an aerial collision involving federal firefighting aircraft.

The board backed two bills – H.R. 1432 and S. 687 – that would keep open 149 towers targeted under federal sequestration. The legislation was introduced on April 9 and enjoys broad support from Democrats and Republicans.

Senate bill 687 would prohibit the closures during the 2013 and 2014 fiscal years. House bill 1432 would transfer money within the FAA to keep the facilities in operation.

The Cal Fire air base at the Ramona airport responds to more than 400 calls a year. During major wildfires, up to 18 firefighting aircraft can operate out of the airfield. In addition, the airport handles more than 155,000 general aviation operations annually.

Other prominent officials who have raised concerns about the closure include Dave Hanneman, chief of the Chula Vista Fire Department and president of the San Diego County Fire Chiefs’ Association, and Ray Chaney, air operations division chief with Cal Fire.