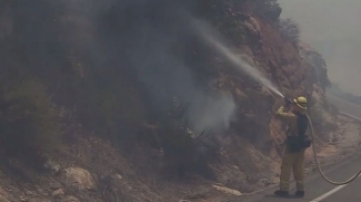 June 28,2016 (San Diego) -- The San Diego County Board of Supervisors voted unanimously Tuesday to help those who lost homes or buildings in the Border Fire. The County will waive fees for building permits and plan-check reviews.

Fees will only be waived for structures that were legally permitted originally, prior to the fire. The Board’s Tuesday action would also distribute trash bins to people in the fire areas to help them clear debris.

The Border Fire started June 19th and over the past 10 days has charred over 7,600 acres, destroyed five homes and 11 outbuildings. CAL FIRE reported Tuesday that the Border fire, which grew to 7,609 acres, was 92 percent contained.

“It’s an absolute tragedy for anyone who has lost everything,” said Supervisor Dianne Jacob, whose district includes the Potrero, Campo and Lake Morena communities ravaged by the Border Fire.

The Board of Supervisors waived re-building fees for fire survivors in previous fires, including the 2003, 2007 and 2014 firestorms.

Jacob said Tuesday that hundreds of homes were spared by the quick, coordinated, overall response to the fire, which included CAL FIRE, the San Diego County Fire Authority, mutual aid companies and air and ground attacks.

She added that the overall response to the fire included coordinated efforts from numerous agencies, including the County’s departments of emergency services, animal services, public works and environmental health; 211 San Diego; the American Red Cross of San Diego and Imperial Counties; CalTrans; and the California Highway Patrol.