June 12, 2020 (San Diego’s East County) -- As East County residents struggle to recover from the health and economic impacts of COVID-19, the pandemic is becoming a key issue in the November election.

ECM spoke with candidates for our region’s top tier races, where three open seats will mean new leadership for the first time in decades in two of our region’s Congressional districts as well as East County’s county supervisorial district.

When people cast their votes, the ongoing health threat will be foremost in their minds, said former 49th District Rep. District Rep. Darrell Issa, a candidate in the race to replace 50th Congressional District Rep. Duncan Hunter, who resigned after pleading guilty to diverting campaign funds for personal use. Worried about the ongoing impacts of the pandemic, voters want leaders who can “safeguard this from happening again,” said Issa, a Republican.

Issa’s Democratic opponent, Ammar Campa-Najjar, agrees that voters are paying close attention to how candidates address problems caused by COVID-19. “When people go to the polls this November, they will know who was there and who was not there for them when times got rough,” he said.

The 50th District includes Alpine, Borrego Springs, Escondido, parts of El Cajon, Lakeside, Pine Valley, Santee, San Marcos and Temecula. Campa-Najjar and Issa differ on what should be done about the pandemic and the role the federal government should play in the recovery.

On March 4, Issa suggested Democrats had inflated the seriousness of the new coronavirus. Weeks after the COVID-19 virus had begun rapidly spreading around the world and the World Health Organization (WHO) had declared the novel coronavirus a matter of worldwide health concern, Issa sent a March 4 fundraising letter in which he accused “the left” of “manufacturing crisis after crisis” including climate change and “the outbreak of viruses…”  A week later, WHO declared a global pandemic.

Issa has joined a lawsuit that challenges Democratic Gov. Gavin Newsom’s directive to send registered voters ballot for the November election, making California the first state to switch to an all-mail election. Newsom holds that mail-in voting can prevent the spread of COVID-19. The lawsuit alleges that the governor’s directive will create opportunities for voter fraud. The suit is opposed by Campa-Najjar, who says Issa is attempting to compel voters to choose between exercising their right to vote and keep safe from coronavirus.

“Issa should spend less time worrying about silencing Californians and more time helping to get them back on their feet during this pandemic,” Campa-Najjar said.

Issa said he is working to balance safety with the need to get people back to work and businesses up and running. It’s more important to help people succeed than to provide government bailouts for those who face economic hardship, he added.

“We can live with this disease as we search for both treatment and cures,” Issa said. “That means our economy can certainly tolerate reasonable risks. When it’s all said and done, everything my constituents want, regardless of the politics, depends on an economy.”

If elected, Issa said he would work to make sure the U.S. wouldn’t have to rely on information from the World Health Organization in the future. He holds that the organization has performed poorly during the COVID-19 pandemic.

Campa-Najjar says it’s important that the public stays informed. He noted that he hosted a town hall to update people on economic relief and public health developments related to COVID-19. His campaign published a COVID-19 resource guide listing aid sources, health info and regional updates, as well as profiling small businesses in need during the pandemic. If elected, he said he would work to ensure that residents and businesses “get the support they need to recover from the crisis plaguing our country.” That includes receiving paid sick leave, family leave, health care, and affordable child care.

The Race for District 53

In the November run-off race to represent Congressional District 53, where long-time Congresswoman Susan Davis is retiring, two Democrats are vying for voter support. San Diego City Council President Georgette Gómez is running against Sara Jacobs, a former Obama administration advisor. The district includes La Mesa, Lemon Grove and Spring Valley, as well as portions of San Diego, El Cajon, and Chula Vista. The next Congress “will be almost entirely focused on recovering from the economic and public health crisis we are now facing,” said Jacobs.

The COVID-19 crisis has made it clear that government matters and that experienced leaders can make a difference, Gómez said. “COVID-19 has a shined a light on the need for bold action on our biggest challenges.”

This includes affordable healthcare and childcare all families can rely on, a national recovery plan to rebuild jobs and infrastructure, and “a fair economy that puts essential workers, and public health, ahead of profits,” Gómez said.

“In the pandemic’s initial days, I authored San Diego’s eviction moratorium to protect families reeling from the economic impacts of COVID-19,” Gómez said. “I worked with the mayor to provide economic relief to small businesses and county leaders to put $10 million towards childcare for essential workers. I’ve been on zoom calls and on the ground in every part of the district to coordinate everything from food distributions to access to testing. Throughout, I’ve been inspired by the everyday heroism and unity on display in all of San Diego. I know we have what it takes to get through this crisis.”

If elected, Gómez said she would fight to ensure that people, not corporations, are first in line for COVID-19 relieve and that federal funding cuts imposed by the Trump administration are restored.

Jacobs’ campaign organization says said the candidate has taken steps to protect her staff and the public from COVID-19.

“On March 16, even before state or county health orders were issued, we closed all three of our campaign offices and our staff has been working remotely since then,” said a statement from Jacobs’ organization. “We have not engaged in any face-to-face campaigning activities since the primary election -- our last big gathering was our election night victory party.”

Jacobs has spoken out about the need for pandemic preparedness and has developed a small business relief plan. She also has called on Congress to address child-care funding for essential workers. The candidate and her team have donated blood and delivered food to essential health-care workers. As chair of San Diego for Every Child, an initiative formed to reduce childhood poverty, she helped create the San Diego Children’s COVID-19 Fund, which has helped mobilize over $16 million for child care for essential workers. Recipients will include nurses, grocery store workers, and postal workers.

“While voters talked with Sara about a myriad of issues during the primary -- from climate change to gun violence to the high cost of living in San Diego -- COVID-19 has become the dominant cause of concern,” said the Jacobs campaign.

In the race to replace East County Supervisor Dianne Jacob, who will step down due to term limits in the 2nd Supervisorial district,  former state Senator Joel Anderson is facing Poway Mayor Steve Vaus. Both are Republicans. Jacob has represented the District 2 since 1992. It is the largest of the county's five supervisorial districts. Encompassing 2,000 square miles, it covers the eastern two-thirds of the county.

Anderson, who has served in the state Assembly as well as the state Senate, said response of candidates to COVID-19 is important to voters. “Every elected official is going to be measured by it and myriad of other issues including taxes, homelessness, and growth,” he said.

“COVID is a huge threat to our community and must be taken seriously,” Anderson said. “We shut our campaign office down to focus on helping those in our community during these troubling times.”

The county is moving in the right direction by providing more COVID-19 tests to ensure the public’s safety and moving forward with reopening the economy, Anderson said. The candidate noted that he conducted a survey to find out how residents are faring during the pandemic. He and his wife have cooked and delivered meals to seniors in East County.

Anderson has pushed for the reopening of lakes and reservoirs in East County that were closed because of the pandemic. He holds that they are vital to the health, well-being, and heritage of communities. On June 5, county and San Diego officials announced the full reopening of lakes and reservoirs under the city’s jurisdiction that had been closed in response to the pandemic.

Vaus states, "I was the one to broker the deal to reopen the lakes. Mayor Faulconer and Supervisor Jacob have both acknowledged my role repeatedly. Anybody can call a press conference or create a petition - real results are only possible when there is dialogue and a good working relationship. I'm proud of the hard work we put in that delivered a great result for East County."

Vaus, who serves as chairman of the San Diego Association of Governments (SANDAG) in addition to serving as Poway’s mayor, said the COVID-19 issue shouldn’t be politicized. “We are confronting a public health crisis, and that’s a big challenge that has no place in a campaign.”

His goal has been to make sure that all residents and workers understand how to stay safe during the pandemic, he explained.

“I was also determined to provide assistance for affected businesses, which we did by creating a small business loan program for Poway employers,” Vaus said. “Finally, the most important task was to make sure the food assistance to seniors and low-income people was properly serving them.”

Vaus said the loan program is designed to act as a short-term bridge until businesses receive funding through the federal government. He has created a website called AngelsWillHelp.com to connect people with food deliveries and other services.

The mayor said the county must maintain adequate reserves of personal protective equipment for the frontline health care workers.  As supervisor, he said he would make sure the county health department is properly funded, with prudent financial reserves.

Updated June 23 with e-mailed statement from Steve Vaus regarding his role in reopening local lakes. 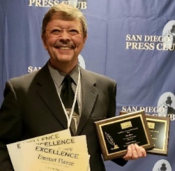 In 2019, Pierce received 11 writing awards from the San Diego chapter of the Society of Professional Journalists and the San Diego Press Club. The categories included business, education, multicultural reporting, criminal justice, and housing.