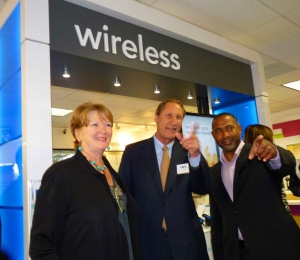 “We did a lot of research and we found that while people like having cell phones, they don’t think it’s fair to lose unused minutes,” said Dave Bialis, Senior Vice President and General Manager of Cox’s California operations at a grand opening of the company’s remodeled Euclid retail outlet, now a Cox Wireless store where shelves sport a wide variety of wireless phones, Androids and accessories.Under the Cox plan, customers who don’t use up their minutes can get up to $20 a month back on their bills., he said. 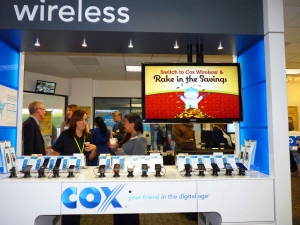 The store is one of five retail outlets countywide (including an East County store in Santee), with a sixth coming soon in Hillcrest. Customers must already own at least one Cox product in order to purchase wireless services.

“These are Androids. They are Google, which is worldwide and on more networks than iphones,” Bialis said of the company’s new entries into the smart phone marketplace. “More phones will be arriving on shelves by Christmas,” he added.

Going to bat for Cox Wireless, Padres Hall-of-Famer Tony Gwynn will be at Cox Wireless on Euclid on Saturday, October 8 from 1 to 2 p.m.

• MoneyBack MinutesSM - Depending on your voice plan, get up to $20 back every month for unused minutes;
• Bundle Benefits SM - Free upgrade on your video, Internet or phone service. Choose from a premium movie channel such as Starz or Cinemax, higher Internet speeds, free unlimited domestic long distance calling on your landline, or early nights and weekends on your mobile phone.
• Free Usage Alerts – Receive a text message before you go over your monthly minutes so there are no surprise overage charges on your next bill.
• Talk List* – Customers with a monthly wireless plan of 800 minutes or more can enjoy unlimited free calling between any number on their Talk List. (Excludes monthly unlimited plans).
• Mexico Calling Plan – Lowers per minute rates to mobile and landline phones in Mexico.

“With the addition of wireless services, Cox has devised an approach that is a natural extension of its bundle, providing value and simplicity which should resonate with consumers,” stated Irene Berlinsky, senior research analyst with IDC. 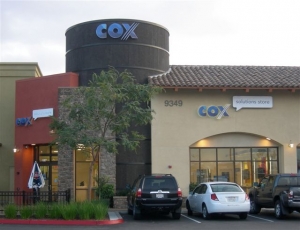 With the arrival of Cox Wireless, mobile solutions are now available at the recently unveiled Cox Solutions Stores throughout San Diego County. At the heart of the in-store experience is the Learning Lounge, a comfortable area where a friendly and knowledgeable Solutions Educator is available to help answer customer questions one-on-one or in a workshop on such topics as accessing the features of your new Cox Wireless phone, programming your DVR from multiple devices, or home networking. Cox Solutions Store locations include: 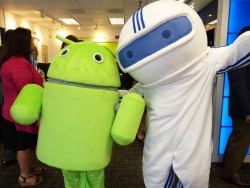 Cox customers with an Android device can easily download the Cox Mobile Connect app from the Android Market to program their home DVR and see their home TV listings from their mobile device.

Additional features include Universal Contact Manager to securely manage, backup and organize all Cox High Speed Internet and Cox Wireless contacts in one place, as well as Voice Mail to Text which converts voice mail messages to text and delivers them to the Cox Wireless device as a text message, giving customers the freedom to read messages and respond without ever dialing.

Cox Communications is a broadband communications and entertainment company, providing advanced digital video, Internet, telephone and wireless services over its own nationwide IP network. The third-largest U.S. cable TV company, Cox serves more than 6 million residences and businesses. Cox Business is a facilities-based provider of voice, video and data solutions for commercial customers, and Cox Media is a full-service provider of national and local cable spot and new media advertising.

Cox is known for its pioneering efforts in cable telephone and commercial services. For seven years, Cox has been recognized as the top operator for women by Women in Cable Telecommunications; for six years, Cox has ranked among DiversityInc's Top 50 Companies for Diversity, and the company holds a perfect score in the Human Rights Campaign's Corporate Equality Index. More information about Cox Communications, a wholly owned subsidiary of Cox Enterprises, is available at www.cox.com and www.coxmedia.com.

For more information about Cox Wireless service and details on devices and all rate plans, including images and videos, visit cox.com.