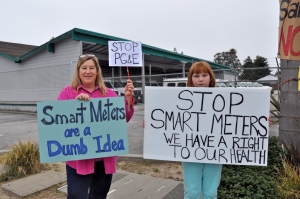 November 12, 2014 (San Diego’s East County) – The California Public Utilities Commission (CPUC) is weighing options that could make it more expensive to opt out of having a smart meter or even allow your right to remove a smart meter to be taken away in the future, under an interim proposed plan, warns the Center for Electrosmog Prevention. The group is an official intervenor in the current CPUC proceding on smart mater opt outs and recently   filed a formal response to a proposal that CEP founder Susan Brinchman of La Mesa calls “noxious.”

The proceeding is expected to close in December with a CPUC decision to follow.  California residents may send comments via e-mail to Administrative Law Judge Amy Yip-Kikugawa at  ayk@cpuc.ca.gov and to CPUC Chairman Michael Peevey’s advisor manisha.lakhanpal@cpuc.ca.gov.  You can also contact the Governor and your state legislators, or attend a CPUC meeting.  A current list of CPUC meetings is here.

Smart meters were initially required by utilities that initially balked at allowing consumers to opt out.  Currently, the CPUC allows consumers to opt out, but utilities can charge a fee for opt-outs and a small monthly charge to read meters.  Substantial numbers of consumers complained of health issues from smart meters, including ECM’s editor, who suffered ear pain and heart palpitations after a smart meter was installed outside her bedroom window, issues that disappeared when she traveled and vanished permanently after the smart meter was finally removed.

Brinchman states, “We are very concerned that what doctors say are hazardous smart meters could be forced on us all, once again. We are concerned about those who cannot afford the opt-out fees, about those subjected to large banks of meters, about commercial meters that don't even qualify now for an opt-out - about smart meters harming the public with little recourse.”

CEP presented a critique, pointing out that health and safety, denied as a factor by Administrative Law Judge Yip-Kikugawa and Head Commissioner Michael Peevey (see below), is required to be considered; that opt-out fees should be lowered or eliminated; and that Community Opt-outs must be allowed. Here is the CEP Comment on the Proposed Decisions