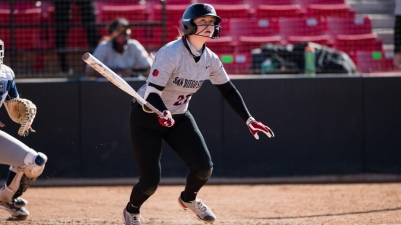 February 13, 2022 (San Diego) - Danielle Romanello homered twice and drove in four of San Diego State’s five runs to lead the Aztecs to a 5-2 victory over Cal Poly on the final day of the San Diego State Season Kickoff Sunday at SDSU Softball Stadium.

Romanello connected on a pair of two-run homers, giving SDSU (4-1) a 2-1 lead in the bottom of the second and making it a 5-1 advantage with her second in the sixth. It was her first two home runs of the young season.

The Mustangs (0-5) struck first in the top of the first inning when a single by Lily Amos scored Jessica Clements. CP also scored in the seventh as a single by Noellah Ramos plated Sydney Frankenberger.

Isabella Espinoza matched Romanello with two hits, while Taylor Adams and Mac Barbara also had hits for the Aztecs.

Allie Light picked up the win after allowing one run on six hits over four innings. She struck out one without issuing a walk. Dee Dee Hernandez relieved Light in the fifth and gave up one unearned run on four hits over three innings to record her first career save.

C Danielle Romanello recorded two home runs in the same game for the first time in her career. SDSU had two players with two home runs in a game last year, including Alexa Schultz at Utah State on April 24 and Shelby Thompson at UC Santa Barbara on April 10.

San Diego State has allowed exactly one earned run in all five games this year. The Aztec pitching staff has combined for a 1.03 ERA in 34 innings so far in 2022.

SDSU recorded three double plays, tying for its most in recorded history (also April 28, 2018 vs. Colorado State and March 21, 2009 at Cal State Fullerton).

Other Sunday Games at the San Diego State Season Kickoff