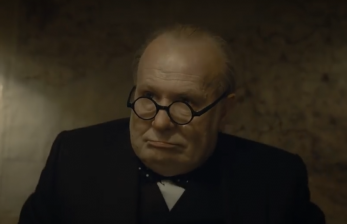 December 15, 2017 (San Diego) - A lot has been said about Winston Churchill.  Some people (the British) see him as a hero who won Britain the Second World War.  Americans probably see him as that too, but with an added dose of crazy.  And still, some people in darker circles don’t see him as a hero at all.  Focus Features’ Darkest Hour reveals the truth about the man. Or does it?