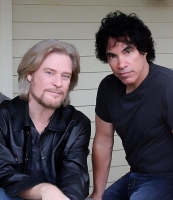 July 8, 2014 (San Diego)--Daryl Hall and John Oates, the number one selling duo in music history, will be performing on Saturday, October 25th at the San Diego State University’s Cal Coast Credit Union Open Air Theater.  Tickets go on sale Friday, July 11 at 10 a.m. at all Ticketmaster ticket centers, the Viejas Arena box office, online at LiveNation.com or by phone at 800-745-3000.

2014 is a big year for Hall and Oates, who just got inducted into the Rock and Roll Hall of Fame. Starting out as two devoted disciples of earlier soul greats, Daryl Hall & John Oates are soul survivors in their own right.

They have become such musical influences on some of today’s popular artists that the September 2006 cover of Spin Magazine’s headline read: “Why Hall and Oates are the New Velvet Underground.” Their artistic fan base includes Rob Thomas, John Mayer, Brandon Flowers of the Killers, Ben Gibbard of Death Cab For Cutie and MTV’s newest hipsters Gym Class Heroes who dubbed their tour “Daryl Hall for President Tour 2007.” One of the most sampled artists today, their impact can be heard everywhere from boy band harmonies, to neo-soul to rap-rock fusion.

Signed to Atlantic by Ahmet Ertegan in the 1970’s, the two have sold more albums than any other duo in music history. Their 1973 debut album, Abandoned Luncheonette, produced by Arif Mardin, yielded the Top 10 single, “She’s Gone,” which also went to #1 on the R&B charts when it was covered by Taveras. The duo recorded one more album with Atlantic, War Babies, (produced by Todd Rundgren) before they left and promptly signed to RCA. Their tenure at RCA would catapult the duo to international superstardom.

Hall  also wrote the H&O single "Everytime You Go Away," which singer Paul Young scored a number-one hit with a cover of the song in 1985. That same year, Hall and Oates participated in the historic “We Are the World” session as well as closing the Live Aid show in Philadelphia.

By 1987, the R.I.A.A. recognized Daryl Hall and John Oates as the  number one selling duo in music history, a record they still hold today.

Daryl Hall’s latest project is a multi-award-winning monthly web series (and Palladia TV show), Live from Daryl’s House (www.livefromdarylshouse.com). “It was a light bulb moment,” he says of the show’s genesis. “I’ve had this idea about just sitting on the porch or in my living room, playing music with my friends and putting it up on the Internet.”  Live from Daryl’s House is also aired weekly on the Palladia Channel every Thursday at 11pm EST/8pm PST.

In April of 2011, Oates released his solo album, Mississippi Mile on Elektra Records.  People Magazine gave the album 3 out of 4 stars.  “[Mississippi Mile] has the opportunity to reach across the board – and that’s a winning formula.” – Nashville Lifestyles

Hall released his solo album, Laughing Down Crying, on Verve Records on September 27th,  2011.  The album has received a lot of critical acclaim from the Huffington Post, Spinner and Pop Matters, who said: “With the songs that make up this fine collection of American soul and pop music, Hall proves that with the pen and at the mic, his voice is more than capable of reaching the depths and heights of emotional truth.”

Most recently as a duo, Daryl Hall & John Oates released their first box set, Do What You Want, Be What You Are: The Music of Daryl Hall & John Oates.  The box set marks the first comprehensive multi-CD, multi-label deluxe box set compilation ever assembled from their entire career’s work, four CDs containing 74 tracks (16 of them previously unreleased).

With the fortieth anniversary of their seminal second album, Abandoned Luncheonette, 2013 found Daryl Hall and John Oates very much at the height of their powers making their own kind of soul, with a new generation of musicians recognizing not only their historic track record of success, but also their continuing influence and achievements.

The best live music show. Thanks to all who make it happen.