Allan has filed candidate intention paperwork (form 501) to launch fundraising for the race. In an interview with East County Magazine, he confirmed that he is running because he believes Jacob and the other Supervisors have failed to adequately prepare our region for protection against wildfires.

“Trust me, it can happen again,” he said of the devastating fires that ravaged San Diego County in 2003 and 2007.

While he praised Supervisors for some actions, such as moving toward consolidation of fire agencies into a County Fire Department and improving communications, Allan faults Supervisors for not adequately funding fire protection and relying on cities such as La Mesa to foot the bill for firefighting in the County.

Allan noted that San Diego County spends far less than Los Angeles or Orange County on fire protection. “The cities subsidize the County, because we send our engines out and we backfill our stations with overtime,” he said. “There is around $439 million a year spent on fire protection in San Diego County, and the County’s share is around $15 million for 2,000 square miles. La Mesa’s share is $8 million—for just nine square miles.” 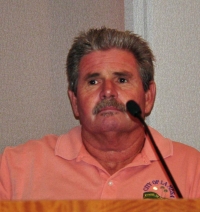 He faults the County for diverting funds from Proposition 172, which was sold to voters with TV commercials showing footage of wildfires and pledging to use funds for improved fire protection. Instead, the County has expended virtually all of those funds on law enforcement. Only a small fraction of Prop 172 funds are coming back to local cities, he added.

“I went into the Army at 19 and I’ve been in public service all of my life,” Allan stated in a 2008 interview with ECM. He served with the 8th Division, 10st airborne and later worked for the U.S. Federal Fire Service . Allan also spent 17 years with the San Miguel Fire Protection District, where he also served as president/director of legislative affairs for the San Miguel Firefighters.

“I’m proud of being a union member,” Allan told ECM in an interview Saturday, but denied that he was recruited by any union to run for Supervisor. “These are working families. I’m proud of what we did in La Mesa.” When city revenues dropped sharply as a result of the economic downturn and state budget cuts, he noted, “Our employees took a pay cut, but nobody got laid off.”

Elected to La Mesa’s Council in 2000 as a Republican, Allan changed his registration to Democrat early in 2008 and won reelection in November. He explained the shift this way: “I represent everybody. I don’t agree with everything on either side. But we forgot about the working person…I’m going to do what’s right.”

Barry Jantz, in a blog posting at Flash Report ( http://flashreport.org/blog0a.php?stID=2009103023590040&authID=200511011...) described Allan as a social conservative, fiscal moderate and union supporter. In an interview with Jantz, Allan reiterated his commitment to making fire protection a top priority if elected Supervisor. “This is a bout lives. It’s unacceptable,” he said.

During his term in public office, Allan has demonstrated his independence. Though he opposes outsourcing city jobs in generally, he supported forming a private partnership with a paramedic service to save funds for cash-strapped La Mesa. He backed formation of a tri-city firefighting partnership with El Cajon and Lemon Grove, a move he says will save the city a quarter of a million dollars.

Allan says he believes in putting public safety first. He has chaired a Public Safety Committee for the California League of Cities and served on the National League of Public Safety, as well as the YMCA board of directors and the Prisoner Re-Entry Committee for California. His accomplishments also include getting workshops locally for seniors on changes in Medicare and Medicaid, helping restore a meals program for seniors, establishing a 911 memorial honoring La Mesa firefighters who participated in rescue efforts at the World Trade Center, and supporting youth services.

Though a fiscal conservative, Allan voted to put a measure on last November’s ballot to let voters decide whether to approve a sales tax increase. (Voters passed the measure.) He opposed the County’s proposed fire tax measure, arguing that Supervisors should free up funds for firefighting out of Proposition 172 monies instead.

“I think I’ve represented my city well,” Allan says. “I’ve been elected three times and I was the biggest vote getter. I’m not the most eloquent speaker; I just tell it like it is…and fire is the number one issue.”
Allan voted on some issues based largely on impacts to La Mesa (such as Powerlink) but recognizes that if elected Supervisor, he will be representing a far broader constituency. He says he is now forming an advisory team and will be closely studying many topics ranging from County budget to land use issues to whether backcountry communities lack adequate power generators in case of emergencies.

But fire remains his primary concern. “I’d stand right next to Dianne and take my name out of the hat right now if she would do what I want to see done,” said Allan, who said Jacob has done a good job in other areas. “Dianne’s been a friend of mine over the years. She’s put me on different boards,” he said.

Allan knows that battling Jacob for a seat on the County Board of Supervisors will be a difficult task. Now in her fifth term, Jacob has strong name recognition, fundraising capabilities, and political savvy.

But to Allan, making our region safer from fire is worth taking a risk of getting burned by the electorate.  He concluded, “I’m passionate about fire protection. I’m a career firefighter. I’ve been talking about this issue for years…When I die, they’ll put `Prop 172’ on my grave.”

David Allan called today to inform me that after further reflection and conversations with friends and colleagues, he has decided not to pursue plans to run for Supervisor.

“My decision to file was due to my passion and commitment to fire protection,” he said, but added that the decision was “made in haste” and that he now believes his commitment to La Mesa should remain his number one responsibility.

Allan said he will continue to be a vocal proponent of improved fire protection funding and hopes to have cities join together to meet with County leaders towards that goal. “Until the cities get involved, nothing is going to change,” he said.

“I am committed to taking on the County on this issue,” he said.
Allen added that he also wants to fulfill his obligations as a newly-appointed member of the SafeCom Committee, a U.S. Homeland Security group formed of representatives from local, state, federal and tribal safety agencies to improve public safety response.

San Diego Rostra first reported the story on Friday. Lots of comments have been made there..
http://sdrostra.com/?p=779