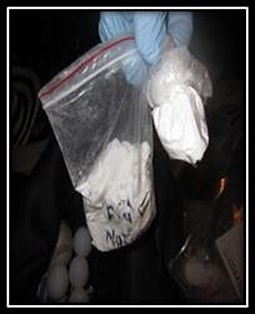 June 20, 2017 (Lemon Grove) – One of the nation’s largest seizures of fentanyl ever, over 44 kilograms, has been announced by the U.S. Attorney’s office in San Diego.  Fentanyl is more than 50 times stronger than heroin, but has been used to boost potency of heroin or counterfeit opioid painkillers resembling oxycodone.  This has led to an “epidemic” of deaths from fentanyl-laced street drugs, according to prosecutors.

Most of the fentanyl seized was at a home in Lemon Grove. Three suspected traffickers have been charged with possession with intent to sell:  Jonathan Ibarra, 45, Hector Fernando Garcia, 46, and Anna Baker, 30. The defendants could face life in prison and up to $10 million in fines if convicted.

According to a search warrant affidavit, the defendants discussed the transportation of a then-unidentified controlled substance. On November 30, 2016, Ibarra received instructions to have a female courier, later identified as Baker, transport the narcotics in three separate trips on consecutive days.

Based on this information, agents requested a traffic stop of Baker’s rented vehicle and seized about 15 kilograms of a substance later determined to be fentanyl. Law enforcement officers then obtained a search warrant for Baker’s residence, where they found about 30 additional kilograms of the same substance.

Fentanyl is so potent that only 3 milligrams is enough to kill an adult male, so the 44.14 kilograms seized could result in 14 million deadly doses, according to officials.  It can also pose dangers to first responders handling traces of the drug.

The arrests were the result of a long-term investigation by the U.S. Drug Enforcement Administration  and the Organized Crime Drug Enforcement Task Force, a partnership that brings together the combined expertise and unique abilities of federal, state and local law enforcement agencies.