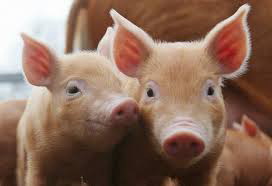 May 3, 2014 (Sacramento) – A virus that is deadly to baby pigs has wiped out 10 percent of all pigs in America in the last year, the National Journal reports.

According to the U.S Department of Agriculture’s Chief economist, Dr. Joseph Glauber, the Porcine Epidemic Diarrhea Virus , or PED, has spread to 30 states.

That includes California, according to the California Department of Food and Agriculture. The state's website does not list where in California the potent virus has been found.

Most older pigs recover within 7 to 10 days. But the virus is deadly for nearly 100 percent of pigs under 3 weeks old. There is no vaccine, no effective treatment, and no cure.

The first case of PED in the U.S. occurred at an Ohio farm  one year ago in May 2013. It’s not known how it entered the U.S., though it’s also been found in Asia and Canada; some have theorized that China may be where the pig virus originated.

China, the world’s top consumer of pork, has banned imports of live pigs and pig feed from the U.S. So has Japan and now, France.

There are some interstate restrictions on transporting pigs within the United States, too. The virus has proven hard to control, but there are steps that can be taken to lessen the risk of spreading the disease.

In San Diego County, with the County Fair at Del Mar and the Ramona Country Fair both coming up, it’s important for people entering livestock for judging to be aware of these steps to take to protect your animals, and others.

California’s Department of food and Agriculture cautions those who raise pigs or exhibit them at fairs take care to wash hands after handling animals and improve sanitary conditions, since the virus is spread through manure that can survive even in small bits that travel on boots or in trucks. Some farmers require workers to change clothes or shoes after entering pig sties or even banning visitors to their farms.

The BBC reports that some suspect pig feed may also play a role in spreading the virus.  That’s because dried pig blood has been added to some feed given to weaned piglets.  A video shot by the Humane Society has sparked outrage, showing what it called a “piglet smoothie” made from infected animals being fed to sows at a Kentucky farm.

PED causes vomiting and diarrhea in infected pigs.  In California, the disease must be reported to the state.

Across the country, the impact on pig farmers has been severe, with some of those hardest hit by the virus left with little to sell, Dr. Glauber told the House committee on Agriculture’s subcommittee on Livestock, Rural Development and Credit on April 30.

The good news is that the virus poses no risk to humans, agriculture officials say.  The bad news is that if you plan to serve pork at your next summer barbecue, you’d better plan on paying a lot more, since due to the viral outbreak, pork prices have risen 20% in the past year.