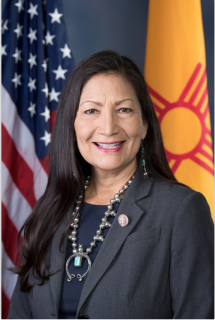 March 15, 2021 (Washington D.C.) – By a 51-40 vote, The U.S. Senate has confirmed Deb Haaland to serve as Secretary of the U.S. Department of the Interior, the first Native American to lead a federal cabinet agency and only the third woman to head up the Interior Department. Her appointment by President Joe Biden has been hailed by Native American leaders and environmentalists  nationwide.

Four Republican Senators (Susan Collins, Lindsey Graham, Lisa Murkowski and Dan Sullivan) joined with Democrats to support the nomination of Haaland, an enrolled member of the Pueblo of Laguna tribe who also has Jemez Pueblo heritage.

In her confirmation hearing before the Senate Energy Committee, Haaland testified, “If an indigenous woman from humble beginnings can be confirmed as Secretary of the Interior, our country and its promise still holds true for everyone.”

Erica Pinto, Chair of the Jamul Indian Village in San Diego’s East County, praised Haaland as an “exceptional choice” in an interview with East County Magazine recently.  She added, “I think all of Indian Country will agree with me.”

Pinto said she believes Haaland has understanding of the challenges faced by Native Americans regarding land preservation.  “She’s talking about planting 30 million trees,” Pinto noted.  “She cares about the environment.”

Haaland’s nomination was supported by the National Congress of American Indians and other Native American organizations. Indian Country Today reports that hundreds of tribal leaders sent letters to Senators in support of her confirmation.

The American Wild Horse Campaign’s executive director Suzanne Roy stated in a press release, “We applaud the historic confirmation of Secretary Haaland and look forward to her inspired leadership in the fight to protect America’s public lands and the wildlife -- including wild horses and burros -- that inhabit them. As a Congresswoman, Rep. Haaland has been a champion for reform of the mismanaged federal wild horse and burro program. We look forward to working with her to implement sensible solutions to humanely manage these majestic animals that 80 percent of Americans want to protect.”

AWHC noted that during her time in Congress, Haaland worked to reform the Bureau of Land Management’s (BLM’s) wild horse roundup program by supporting humane and commonsense solutions to stabilize populations on the range and opposed draconian methods of permanent sterilization introduced during the Trump administration.

Haaland has served in the U.S. House of Representatives since 2018 representing New Mexico, one of only two Native Americans in Congress.

She grew up in a military family; her father was a combat Marine veteran who won a Silver Star medal for saving lives.  Her mother is a Navy veteran who also worked for 25 years in Indian education.

As a single mother, Haaland relied on food stamps at times and struggled to put herself through college while mired in student debt. Ultimately she earned degrees from the University of New Mexico and the UNM Law School.  She also ran her own small business producing and canning Pueblo Salsa.

In addition, she chaired the Laguna Development Corporation Board of Directors overseeing tribal gaming, where she successfully advocated for the organization to create policies and commitments to earth-friendly business practices. She is also a former tribal administrator.

She became the first Native American woman elected to lead a state political party, during the Obama administration. She also traveled to Standing Rock to show solidarity with tribal members seeking to protect tribal sovereignty and natural resources.

In the House of Representatives, she served in leadership roles including as a House Democratic Whip.

She has promised to support tribal consultation, inclusivity and collaboration to her work as Secretary of the Interior, an agency that employs 70,000 people and oversees one-fifth of the nation’s lands, also carrying out the U.S. government’s trust responsibilities with regard to tribal nations.