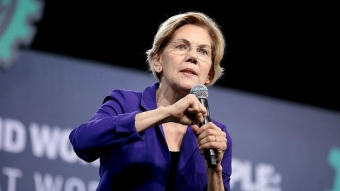 Sen. Elizabeth Warren will be paying her first visit to San Diego as a presidential candidate

The event — her first visit to San Diego County as a candidate — is part of a Western swing, which includes visits to Nevada and Los Angeles.

Warren, the Massachusetts senator and former law professor whose poll ratings have risen in Iowa and elsewhere of late, will appear at 7 p.m. Thursday, Oct. 3 at Waterfront Park adjacent to the County Administration Center.

Entry begins at 5 p.m., with the public encouraged to RSVP online here.

Two new polls by CNN/Des Moines Register, Iowa’s largest newspaper, and by MSNBC put Warren in the lead over former Vice President Joe Biden by two points, with a healthy lead over other challengers.

A poll by Quinnipiac University puts Warren, 70,  in the lead nationwide by two points. However the average of national polls still has her 10 points behind Biden, though above Vermont Senator Bernie Sanders, who appeared in San Diego County several times during his past and current presidential campaigns including in March at the same venue as Warren.

On Oct. 2, Warren will speak at the Presidential Gun Safety Forum hosted by March for Our Lives and the Giffords.

She will also hold a Town Hall in Carson City. On Friday, Oct. 4, she will speak at SEIU’s Unions for All Summit in Los Angeles.