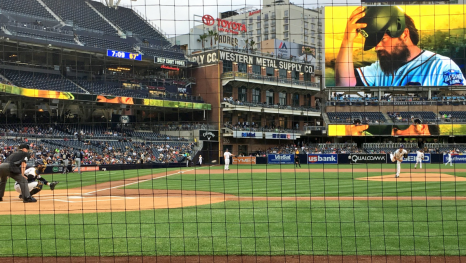 June 7, 2016 (San Diego) - After a great big win last night, the Padres looked to repeat on Zombie Night at Petco Park.  Aaron Blair started on the hill for the Atlanta Braves against Colin Rea for the Padres.

The Braves started the scoring again with Nick Markakis’ double that was almost a home run, driving in Freddie Freeman to give Atlanta a 1-0 lead in the first.

But in the bottom of the first, we saw why the Braves are called the Barves.  Matt Kemp singled into center.  The ball was bobbled by the center fielder and Wil Myers came home to tie the game at one.

The Braves got the lead back on a Chase D’Arnaud single in the third, scoring Ender Inciarte and giving Atlanta a 2-1 lead.  Markakis hit a sacrifice fly to drive home D’Arnaud and the Braves went up 3-1.

The Padres got a run back in the fifth on a Melvin Upton Jr. sac fly that was almost his second career grand slam that scored Jon Jay and the Braves led 3-2.

All was quiet and it looked like the game was lost until the ninth when Derek Norris saved the day and launched a solo homer to tie the game at three.  Myers singled and drove in Alexei Ramirez and the Padres avoided extra innings with a walkoff win, 4-3.

The Padres will wrap up their three-game series against Atlanta--and hopefully finally get their first sweep of the season--tomorrow at 12:40 p.m.