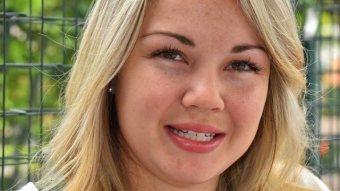 August 14, 2018 (la Mesa) - A year ago this week, 25-year-old Rebekah Basson attended her first meeting as a newly appointed school board member in East County — based in part on her pledge to run for a full term in November 2018.

On Friday, the final list of candidates in San Diego County was posted, including seven running for three seats in the K-8 La Mesa-Spring Valley School District.

Basson’s name wasn’t on it.

Neither were those of board President David Chong, who will have served a single four-year term, and Bob Duff, first elected in 2004. At 79, Duff’s bowing out was not unexpected. (See his explanation below.)

And gun-store owner Chong had been under heavy pressure in the wake of a controversial remark regarding the Parkland High School shooting survivors. (Chong in a video rapped elected officials who take “firearms policy advice from kids who were eating Tide pods just last week.”)

But Basson had posted on Twitter as recently as May 15 that “I will be running for #ReElection in the fall! This is #ErnieDronenburg, #SDCountyAssessor: he has given his endorsement for my #campaign!”

On April 21, she signed a Form 501 “candidate intention statement” that gave her email address as bassonforschoolboard@gmail.com.

In her school board appointment interview, she was asked by trustee Jim Long whether she would commit to run in November 2018.

According to a meeting transcript, Basson replied: “Appointment or not, I still plan to run. … I fully plan on running and gathering a coalition of my friends and my allies and my mentors, and their friends, and finding all the support that I possibly could to help me run the best campaign possible.”

Neither did Chong, Long nor school board member Emma Turner.

But The San Diego Union-Tribune reported that Basson has told friends she is stepping down to focus on her pregnancy and Chong says he plans to move out of the district — to nearby El Cajon — in 2019.

In any case, the San Diego County Registrar of Voters office listed three men and four women as qualified for the La Mesa-Spring Valley ballot:

Fontenot and McRae are listed as Democrats by the county party.

Basson was picked from five finalists by a board majority of Republicans. She later shared some of her Christian-influenced educational stances.

In October 2017, a Times of San Diego investigation raised questions of whether Basson had committed voter fraud by voting absentee in the November 2016 election in Georgia while also claiming La Mesa as her principal residence.

On Monday, board member Duff noted that he’d be 84 by the end of another term and the groups he serves are children ages 4 to 14, plus teachers, administrators and classified, “most of whom are under 60.”

“My likelihood of being able to identify with their lifestyles and needs becomes questionable,” Duff said via email. “Wisdom may come with age, but age itself presents challenges including hearing and memory, both of which tend to fail.”

He said he’s been a teacher for 50 years, but their roles and responsibilities have changed, “and in recent years become more demanding.”

“What children are learning is far more than what it was when I was in ‘junior high school’ in 1950, he said. “The pedagogy is constantly changing for the better from my 1968 classroom experience. Teaching now is far more difficult, challenging, and time consuming.”

He added: “In addition to the ever-changing and challenging budget decisions, I believe an important goal for a Board member is to understand the realities children and staff face in order to make decisions appropriate to today’s challenges.

“Seasoned younger people with knowledge and passion need the opportunity to make recommendations to mold a future, that all will share, and be willing to pass the baton to the next generation at an appropriate time. Younger minds will make that happen.”