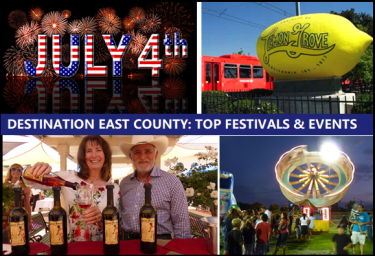 Plus, we’ll have a preview of coming attractions including the Descanso Days Fair and Parade, open house at the Oasis Camel Dairy, Pine Valley Days, and a local Laurel and Hardy fan club's 40th anniversary film fest party.

LA MESA CONCERTS IN THE PARK

La Mesa’s Sundays at Six concert series continues this Sunday the Wild Nights Band The concert will be held at Harry Griffen Park from 6 to 7 p.m.

For a full schedule of upcoming concerts, visit the city’s website at CityofLaMesa.com

Sha Na Na debuted in the ‘50s, performed at the now legendary Woodstock festival, in the movie Grease, and on their own Sha Na Na TV show. Founded by students at Columbia University in New York, the band has continued through the years with new members from Columbia joining three of the original band members still on tour.

On June 29th, Sha Na Na brings its distinctive sound to Sycuan’s Live & Up Close theatre for a live performance at 8 p.m. For tickets, you can visit www.Sycuan.com.

The City of Lemon Grove and the Lemon Grove Historical Society will be hosting a birthday party at the big lemon on July 3rd from 10 a.m. to 10:30 a.m. at the southwest corner of Broadway and Lemon Grove Avenue.

You’re invited to come sing America the Beautiful and Happy Birthday Dear Lemon, hear from dignitaries, have a tasty lemon bite, learn lemon factoids, and join in a ribbon cutting to usher in the next 90 years.

The beloved lemon is also getting a beauty makeover including a bath, a fresh yellow complexion and vintage makeup thanks to a sign painter who will be working through the weekend to have the lovely lemon looking her best for her 90th anniversary as the city’s symbol of its agricultural roots.

Just in time for Independence Day, Brew Coffee Spot in La  Mesa is hosting a patriotic stencil painting class on Moday, July 2nd from 4 to 6 p.m. Even if you’ve never painted before, you’ll learn step by step creativity with acrylic paints. For details you can visit www.BrewCoffeeSpot.com.

The Lake Murray Fireworks and Music Fest will celebrate Independence Day on July 4th from 11 a.m. to 9 p.m. with live bands, food, fun, and a fireworks finale.  The festival will be held on the San Carlos side of Lake Murray, but the full lake will be open during the day for fishing and other family-fun activities.

For more information, you can visit www.LakeMurrayFireworks.org.

Alpine’s Fourth of July Festival Parade rolls out at 10 a.m. Wednesday down Alpine Boulevard featuring a biplane flyover, donkeys, a clown on stilts, the Alpine outlaws, tumblers, floats, and a wolf on a motorcycle among over 50 entries.

After the parade, which ends at Tavern Road, a festival will be held at the Alpine Community Center, where Uncle Sam will be posing for photos. There will also be games, a dunk tank, bounce house and vendors galore.

The parade is presented by the Kiwanis Club, Alpine mountain Empire Chamber of Commerce and alpine Community Center. The major sponsor this year is the Viejas Band of Kumeyaay Indians.

The City of El Cajon invites you to a 4th of July picnic and fireworks at Kennedy Park, located at 1675 East Madison Avenue.

The fun starts at 1:00 p.m. with food, games, prizes, kiddie train rides and more! Live musical entertainment begins at 3:00 p.m. and fireworks at 9:00 p.m.  Arrive early for parking to find the best spot for your picnic and to view the fireworks!

“If it moves, it can parade!” say organizers of the 6th annual Deerhorn Valley Independence Day Parade.  That includes wagons, carts, tractors,  bikes, strollers, joggers, horses, dogs, emus and other animals in a parade that reflects small town Americana at its best.

Staging for the parade in Deerhorn Valley, a small town south of Jamul, begins at 9:30 a.m. at McNeil’s Field at the junction of Elena Way and Mt. Elena (accessed off Deerhorn Valley Road: see map) with the parade rolling out at 10 a.m. A picnic follows, with hotdogs, chips, ice cream, water and free popcorn. There will also be face painting and vintage autos on display.

The parade is organized by the Deerhorn Valley Community Association.

The City of Santee will present Santee Salutes, featuring all-American fun and fireworks on July 4th from 2:30 to 10 p.m.  The festivities take place at Town Center Community Park East in Santee.

You can line up on the town’s main street to wave flags, cheer the marching bands, and watch a giant American Flag carried through the town. Bands include a bag pipe band, Dixieland jazz, mariachi music and the Gold Drum and Bugle Corps.

Pre-parade events include two flyovers by vintage aircraft, gunfights with Julian Doves and Desperados and patriotic music. After the parade, there will be a barbecue, music and dancing at the American Legion and a historic quilt show by the Julian Woman’s Club at the historic town hall. For more information, see VisitJulian.com.

EL CAJON DINNER AND A CONCERT

El Cajon’s dinner and a concert series continues on Prescott Promenade each Friday night. The next concert will be a Santana Tribute by Santana Ways on July 6th.

Concerts start at 6 p.m. Bring a picnic, or arrive early to dine at one of the many restaurants downtown. For a full schedule visit downtownelcajon.com/

The 49th Annual Descanso Days Parade and Fair takes place on Saturday, July 7th.  The Fair is held at the historic Descanso Town Hall on Viejas Grade in Descanso. The parade rolls out in front of the town hall starting at 10 a.m. – but arrive early, since the road closes at 9:30 a.m.

This year’s theme is “Dog Days of Summer” and will include Paws for Purple Hearts, which trains therapy dogs for veterans. There will also be country music from noon to 5 p.m. by Hill Country, food, beer and wine, vendor booths, a kids’ area with face painting and crafts, and plenty of good times.

El Cajon's Classic Cruise Car Shows continue each Wednseday night now through October 31 along East Main Street between Magnola and Claydell Avenues from 5 to 8 pm. On July 11, the show will feature a tribute to NASCAR champion Jimmie Johnson. For more information visit www.downtownelcajon.com or www.cajonclassiccruise.org.

The Oasis Camel Dairy in Ramona will host an open house on July 14 and 15.  You can ride camels, feed treats to camels and mini-sheep, enjoy an animal and bird show, and celebrate summer, camel-style.

For a full schedule of events, you can visit https://pinevalleydays.com.

Saps at Sea, the San Diego  Laurel & Hardy fan club, presents their 40th Anniversary Spectacular on Saturday, July 28 at 7:00 p.m. at Trinity Presbyterian Church in Spring Valley.  The organizers are promising an "ocean of laughs" with a special program of film favorites and some new delights.

The Saps will screen Hog Wild. Then, The Little Rascals star in Hi'-Neighbor!  After intermission with cake and ice cream, Author and Hal Roach historian Craig Calman returns to talk about the man who brought Laurel & Hardy together. Books and 40th anniversary T-shirts will be available for purchase. And finally, the Saps will screen their namesake classic film, Saps at Sea.

That’s all for this week! You can find details on all of these events and more in the calendar and events section at our website, www.EastCountyMagazine.org