Update:  Hunter's attorneys have filed a motion seeking to suppress the evidence of the affairs, claiming it would be prejudicial to a jury. Read details.  A judge later denied the motion and ruled that evidence of alleged affairs can be entered as evidence.

“The facts that Congressman Hunter is literally in bed with lobbyists is extremely problematic because he could be compromised when he considers policy and votes on bills that these lobbyists might be pushing,” Aaron Scherb, director of legislative affairs for Common Cause, told East County Magazine. “And the facts that voters don’t know who these lobbyists are leaves us in the ark about how he could be corrupted.”

The US. Attorneys Office has declined to disclose the names of the women in its motion, though their names could become public if the case does not settle and the women are called to testify, or any other witnesses reveal the mistresses’ identities.  The prosecutors’ 12-page motion details overnight trysts and getaways to places such as Heavenly Mountain Summit in Lake Tahoe. According to the prosecution, the affairs began in 2009 and continued until at least 2016. Hunter allegedly lived with two of the lobbyists, slept with a third, and also had affairs with two Congressional staffers including one who worked in his office.

“It’s unethical.  It looks bad, it smells bad” Scherb says, “but a member of Congress having a consensual relationship with a lobbyist is not illegal. But it calls into question how a member’s actions could be compromised.”

Arguably, swapping sex for votes could be construed as a form of bribery or pay-off, however, which is why many organizations that employ lobbyists have rules prohibiting personal relationships between lobbyists and legislators.  At those organizations, “The lobbyist would probably get fired if he or she were known to be having an intimate affair with a member of Congress,” Scherb affirms. But some organizations have no such rules, and he reveals, “House Ethics Rules are fairly vague and there are instances every year where members of Congress have intimate relationships with lobbyists.”  He could not recall a case where a member was removed from office for this alone.

Hunter’s affair with a staffer in his own office is true, would violate the House Ethics Rules--except that the alleged relationship occurred before the rule was adopted in 2018. Section 18 (a) states that a member “may not engage in a sexual relationship with any employee of the House who works under the supervision of the Member, Delegate, or Resident Commissioner, or who is an employee of a committee on which the Member, Delegate or Resident Commissioner serves.” The only exception is if the staffer is the member’s spouse.

Hunter’s wife, with whom he has three children, does not work in his Capitol office.

Hunter and his wife, Margaret, are accused of stealing $250,000 in campaign funds for personal expenditures including family vacations to Italy and Hawaii, airfare for a pet rabbit, jewelry, video games, liquor, oral surgery and children’s tuition bllls, as well as thousands of dollars that Hunter reportedly spent on his mistresses. They are also accused of falsifying campaign finance reports to hide their misappropriation of donors’ funds.

Margaret Hunter pleaded guilty early this month to one count of conspiracy and has agreed to cooperate with prosecutors in their case against her husband.

Duncan Hunter is charged with 60 counts; his trial is slated to begin in September. He has denied guilt and claims federal prosecutors are politically biased because they once posed for photos with Hillary Clinton during a fundraising stop she made in San Diego where prosecutors were reportedly present on official business  Hunter, a Republican, is a staunch supporter of President Donald Trump, whom Clinton ran against in 2016.

While it’s rare for the House to eject a member of Congress, Scherb says if Hunter is convicted, the more likely scenario is that he could be pressured to resign to avoid the further taint of expulsion.

But there’s no law requiring him to do so. Rep. James Traficant, a Democratic Congressman from Ohio, actually was expelled from the House in 2002 by a nearly unanimous vote, three months after he was convicted of 10 felony counts including bribery, racketeering and tax evasion. During those three months, he continued to collect his salary, though he was prohibited from voting. After he was sentenced and wound up behind bars, he actually ran for reelection from prison, but was defeated by his own aide, Tim Ryan (now a Democratic presidential candidate). Traficant went on to spend seven years in federal prison.

The woman, Rory Riley-Topping, now a conservative columnist, (photo, left, via Twitter) told the Russian Times (RT) that Hunter grabbed her posterior, CNN reports. CNN confirms talking with two friends and her then- fiancée, now husband, who all say that Riley-Topping told them about the alleged groping immediately after the party. 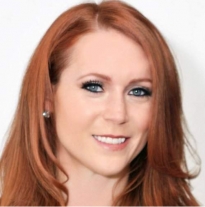 Riley-Topping (left) says Hunter, who appeared to be drunk, approached her and said he wanted to discuss Agent Orange, which was before the committee. After she offered to get in touch with his staff, she told CNN, “He kind of leaned in and said `No, I want to talk to you about it’ and had reached over and pulled himself with his hand on my behind.” She adds, “I felt very uncomfortable. I very awkwardly moved away.”

She says she then told Republican Rep. John Runway, a member of the committee at the time, that Hunter “just grabbed my ass. I don’t want to be here anymore.”

ECM has contacted Hunter’s office to ask whether Hunter’s votes have been influenced by any relationships with lobbyists and for his response to Riley-Topping’s allegations.  We have not received a response. However, Hunter aide Joe Kasper told the San Diego Union-Tribune that the office declined to comment on the groping allegation made by Riley-Topping.

Hunter, a Christian conservative, states on his website, “As a husband and father of three, I strongly believe in preserving family values…”  Voters may find those values inconsistent with his alleged extra-marital affairs with lobbyists and misappropriation of donors’ funds for lavish spending on his family and multiple mistresses.

Hunter has previously sought to blame his wife, who used the campaign charge card for some illegitimate expenses. While Margaret has accepted responsibility for her actions with her guilty plea and expressed remorse, Hunter continues to deny any legal wrongdoing.

A retired Marine and combat veteran, Hunter remained in the Reserves until 2017. His conduct, if the allegations are true, would seem to violate the Marine Corps Code of Conduct clause which states, “Honor: this is the bedrock of our character. It is the quality that empowers Marines to exemplify the ultimate in ethical and moral behavior: to never lie, cheat, or steal; to abide by an uncompromising code of integrity; to respect human dignity; and to have respect and concern for each other. It represents the maturity, dedication, trust, and dependability that commit Marines to act responsibly, be accountable for their actions, fulfill their obligations, and hold others accountable for their actions.”

OMy! Can't catch my breath I'm ROFLing so hard!
Not if you're a Republican, or Conservative. Shameful to hear all these folks talk out of both sides of their mouths, only when it suits the narrative. Let's talk about Jussie Smollett, wonder if Kamala is still "waiting for all the facts to come in" on that one? I'm by no means claiming Hunter to be innocent of any, or all charges, but the people who have convicted him in this forum should be ashamed, you can't have it both ways. Wait until the man has had his day in court, then bash him all you want if he's convicted. Until then, this is nothing but hearsay and reeks of a political hit job.
Another 5 year old claim, attack and smear from another me too woman. When will these ancient claims of misconduct become trash as they should be? Why the continued pummeling of Hunter before his day in court?
Politicians unethical? I'm shocked! Yeah, not so much. Shameful actions on Hunters part continue to be exposed...