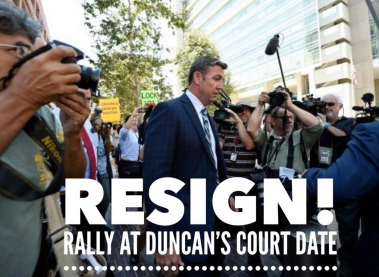 The defense team does not deny the affairs, but instead argues that evidence of intimate relationships is “salacious and prejudicial.”

Noting that the actual indictment lists 18 “personal relationships,” defense lawyers Gregory A. Vegas, Ricardo Arias and Phil B. Adams state, “Evidence that some of Mr. Hunter’s relationships were `intimate’ is neither relevant to whether any expenditure of campaign funds would have existed `irrespective of Mr Hunter’s campaign, nor necessary (or appropriate for the jury to consider when evaluating the case. The Government filed its Motion to publicly embarrass Mr. Hunter with evidence that reflects poorly on his character, and the minimal (if any) probative value of this evidence is substantially outweighed by the substantial risk of unfair prejudice.”

The prosecution, in its motion, argued that because three of the women were lobbyists and two were political staffers, it is necessary to make clear that the expenses went beyond meals or meetings that might be considered legitimate campaign or Congressional business. The expense reportedly included overnight vacations at a Lake Tahoe ski resort, a golf trip, and Uber rides for overnight visits to the homes of some of the women in Washington D.C.

The defense team further argues that even if the Court determines that such evidence has some “slight relevance to the issues in this case, it should still deny the Motion on the grounds that it constitutes impermissible character evidence..”  The motion continues, “While this salacious evidence provides welcomed fodder for the media, as evidenced by the attention this motion received from both national and local news outlets, its questionable probative value is substantially outweighed by the unquestionable danger of unfair prejudice to Mr. Hunter.”

Hunter is accused of 60 counts of embezzling campaign funds for personal use and filing false campaign finance reports to cover up the crimes, along with his wife, Margaret.  The expenditures in question also include family vacations to Italy and Hawaii, oral surgery bills, golf, clothing, jewelry, children’s tuition and airfare for the family’s pet rabbit, Eggburt.

Margaret Hunter recently pleaded guilty to one count of conspiracy and is reportedly cooperating with prosecutors in their case against her husband.

Prosecutors have indicated that they offered Hunter the opportunity to stipulate that the evidence related to personal relationships was true, which would have kept the evidence out of open court, but he declined to accept the offer.

Hunter’s trial is slated to begin in September.  The next scheduled election in the district is a primary race next March, followed by a general election in September 2020.  If the seat were to become vacant through resignation or expulsion from Congress, a special election would be held.

Hunter’s next court appearance is scheduled for Monday.  A group calling itself “Flip the 50th” has announced it will hold a rally outside the federal courthouse at 333 Broadway at 9:30 a.m. Monday calling on the embattled 50th Congressional District’s Republican Congressman to resign.

Ammar Campa-Najjar, a Democrat running for the seat, sent a press release Friday floating rumors that Hunter was planning to resign.  His campaign has referenced calls from pollsters reportedly received by some voters, asking if they would support former Republican Congressman Darrell Issa or Carl DeMaio, a former San Diego City Councilman and conservative radio commentator, for the seat.

But NBC published this flat denial from Hunter aide Michael Harrison, who responded, ““Congressman Hunter absolutely is not resigning.”

Other candidates who have declared interest in running for the seat include El Cajon Mayor Bill Wells, retired Navy Seal Larry Wilske, and Temecula Councilman Matt Rahn, all Republicans.

Why should anyone expect a shameless scumbag like "Dunkin Doughbuts" Hunter to resign? He belongs to the Trump Party and collectively they have no shame.
Watch the news on TV if you think ECM is "slanted" & "biased". You will find the same stories on every channel. Are they all wrong? I don't think so. This is where my comments come in. Knowledge based on a blend of reading several news sources, including ECM, and watching multiple TV news channels. Have any more questions or snarky remarks directed towards me? If so, save 'em, because they mean nothing to me, neither does your opinion.
You are not the reason I read ECM or respond with my views. If my remarks mean nothing to you, why the Cecil B. Demill narratives that smack of a cat in the litter box?
Some people just don't care to understand the news and it's complexities, or perhaps just like to debate everything, including emerging Facts, because their contentious. I read & watch many sources of news. Therefore, my conclusion: they can't all be wrong! Republican support appears to be stalworth no matter what some representatives of this country do. Meanwhile, many of these same supporters are often quick to bash democrats, and blame them for all the negative things happening in this country. The Hunter's weren't all bad, yet their nefarious deeds caught up with them and now the time is here for admission of guilt, then appropriate consequences to follow. The obvious - pay back all the stolen money, and be ejected from office. Jail time is a real possibility though.
I love my country Grandpa, I support our Constitution and Bill of Rights Grandpa, and mostly avoid party lines unless it becomes messy like media gang bangs. Pre judge and be judged. Jump on and take a pound. Get real and follow due process and justice in "my" Country. You have judged by "pay back all the stolen money" etc. so don't trip on your black robe.
ROFLing!

This is not opinion. It is straight up reporting based on court documents and quotes both Hunter's lawyers and prosecutors.

Our reporting is similar to what's being reported in numerous articles in local news outlets and national ones from CNN to Fox News.

We don't know yet whether everything alleged by prosecutors is true or not; that will be determined by a jury assuming this gets to court and Hunter doesn't cut a deal to settle the case first. However, there apepears to be a significant body of evidence beyond mere campaign finance reports.  But our reporting is on part with other media, both local and national, just as we reported on unfolding scandals enveloping Ben Kalasho, Bob Filner, etc.  Here are a few other recent headlines on Hunter in other major media:

You confirmed my observation, that on five (5) occasions, you editorialized stories about Hunter. I did not challenge facts, or give an empty opinion; I don't even know the man. I merely stated that gangbanging a political entity can be bias and totally unnecessary and unfair. In particular before the day in court. This writer is not Democrat, Republican but Conservative Constitutionalist "independent" that votes and supports the "man or woman" and nor bells and whistles PARTIES! When I see gang on editorials, I am offended. I am equally offended when the bias tends to attempt to sway thinking about a pending litigation against one of our United States Representatives. That equates to media bias.
I went back three (3) pages of many and there were five (5) editorials about and against Congressman Hunter. I declare this ECM publications politically bias drawing pied piper followers that support this tripe. I wonder how many more I would have found, if I would have opened all the pages on ECM regarding the Hunter saga?

They are factual news stories and quoted both sides.  Do you not know the difference between an editorial which is pure opinion as on letters to the editor?  This is reporting on new developments in a major criminal trial of a public official.

We had similar frequent updates when San Diego Mayor Bob Filner, a Democrat, faced sexual harassment charges of which he ultimately pled guilty, and of the civil trial of El Cajon Councilman Ben Kalasho, who ran as a Democrat, when he was facing accusations of fraud, defamation and harassment.

Hunter's team has lost all 14 motions that they have filed, incidentally, so it's not like he's had any positive news on his side that we missed regarding his case and our coverage is substantially similar to the other local news media as well as the national outlets covering the case.

All the comments alluding to "activists" stink! Publishing the continual propaganda does nothing to foster due process and fairness. Our founders did not intend to circumvent the justice system. This is purely a matter of ganging up and the best advice is Just shut up!

That sounds like something Bender would say on Futurama. Cigars and hookers? Eighteen affairs? The man needs mental health help. No one is above the law.

Hunter's wife's testimony will probably be instrumental for the prosecution to get a conviction, yet the now self admitted fact that Duncan is a philanderer should be enough to warrant removal from office and shunned by his colleagues.