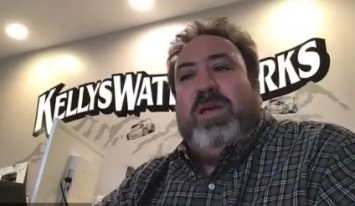 Joel Scalzitti, past president of the Helix Water Board, is running for reelection in district 5, which includes portions of El Cajon, Granite Hills, Bostonia and Lakeside.

He’s served on the board for over 10 years, owns  local businesses including a water service company for freeway construction, a donut shop and a deli.  He also serves as a member of the San Diego County Water Authority Board and the Advanced Water Purification board. He’s also served on several Helix Water District committees, including the audit committee, water quality and resources committee, and a committee on parks. In addition, he led efforts to keep the Lake Jennings campground open.

He’s one of four candidates in the race, including Vickie Knight Butcher,  Luis Tejeda, and Tyler Logan. (View our interview with Butcher.)  Tejeda and Logan do not have ballot statements or campaign websites that we could find.

Scalzitti has depth of experience in water issues and says he has a "passion for public service."  Here are highlights of Joel Scalzitti’s responses to our questions:

What you consider your most important accomplishments on the Helix Water Board?

“It’s more longevity,” he said, adding that it takes time to earn respect of other board members and implement ideas “to be more efficient and better. I pride myself on that for the last ten years – not just going in there to change the world…I pride myself on being a good listener,” he says, adding that he learned listening skills years ago while working as a barber. “The better listener you are, the more effective that you can be.”

What are your main goals if you are reelected?

“I think progressing some of the things that we’ve already begun but making them more efficient,” he says, citing his successful effort to keep Lake Jennings from shutting down. “They didn’t give me any new budget to get it into the green.”  Putting in bigger fish that couldn’t be easily eaten by birds or other fish is an example that attracted more anglers. “Next year we’re looing at some designs to put some money into the park and upgrade…this will not be ratepayer money, it’s assets that we sold so it won’t affect the rates..my goal is to see that through to invest in Lake Jennings and make it more stable for decades to come. We’ve been in the positive now for something like four years.”

How has the pandemic impacted the district’s budget and do you foresee any changes ahead for ratepayers or employees as a result? “It was an unknown so some people stayed home, there’s been a slowdown in the work force. We’re doing a lot of Zoom meetings…adapting to the change.” He adds, “Change isn’t always popular but sometimes we need to embrace it. Sometimes it’s more efficient.” He said at first he opposed Zoom board meetings but it turns out people are often more prepared. “But we do like to get back into the board room.”

Water rates are perpetually the top issue in water district races.  How successful have you been at holding down rates? Should the public be able to weigh in at hearings annually or whenever a rate change is proposed?

“Our rates continue to increase every year and sometimes there is a drought and state puts restrictions on…This year there is a pandemic and people are having trouble paying their water bills.”  He adds, “I led the charge not to have any rate increase this year,” the first year on memory with no increase, he adds, "and got the board to vote to use reserves during the current COVID emergency.  We don’t have to raise it every year just because.”

Some districts such as Padre Dam assess water based on family size and lot size, not just water usage which can push households that have made efforts to conserve into the top tier if they have a large family or a large lot.  Do you support the current system, or should it be changed?

“I do not like the tiered system as much as it makes sense for the staff. I have a large lot and I have another dwelling on my property as well, so I have a larger water bill but I have another family…so I get hit hard because I’m a large water user. But the reality is we’re in the business of water sales…if we don’t sell enough water, then we don’t have enough to pay for commitments that we have such as retirement…then they raise the rate and [people] get mad…I think the new message should be use as much water as you want, but just don’t waste water.”  As for allowing for larger families or larger lots, “I think that is coming in the future,” he says, adding that fixed charges will be going up and usage charges will be replaced, changes he foresees as “inevitable” down the road.

With climate change, water has become a scarcer commodity across the west including southern California.  What more can be done to assure that our region has a clean, stable supply of water?  “We’ve been working on that for years…We’re working on creating our own East County local supply” with adjacent cities and the county.  “It’s water recycling taken to the next level….It’s been a long time coming.” He adds, “We’re going to have probably the first water reservoir augmentation here in the county in the next two or three years…to have our own local supply, drought proof….I think that we’re going to be leading the way and getting our project online first” before the city of San Diego.  He says he previously ran for mayor of El Cajon to make sure the city would be on board.  (Mayor Wells won reelection, but El Cajon did join the Advanced Water Purification project.)  “That’s been my passion.”

Elsewhere there have been efforts to divert water from some districts and shift them to other areas.  Do you believe water belonging to Helix Water District customers should stay in this district, if another county or city sought to buy our local water?

“Obviously we’d like to keep as much water as we can…Helix owns two reservoirs, Cuyamaca Lake in the mountains and Lake Jennings” to store water and draw down during high demand periods. Some districts don’t have this and must pass costs of purchasing water on to ratepayers.  “We’re lucky to be able to do this for our ratepayers.”

“It’s a great question…We’re all trying to adapt but we’re getting so much better at these Zoom things that I think there will be a standard soon” that everyone can live up to.” He adds  that he looks forward to going back into the board room in person, but “maybe we can do one or two meetings a month where we can still do Zoom so the public can access. It is getting a lot more convenient.”   He hopes having recordings online will become “a norm.”

What else would you like the public to know about your candidacy?

“I’m just a regular person like my neighbors…I’m a really hard-working businessman, I do a lot with the community” including schools and law enforcement.  He’s on the Lakeside Chamber board as well. “Public service is my passion,” he says, citing the importance of listening to the community.  “My goal is to make a better place for my kids, and for their kids.”