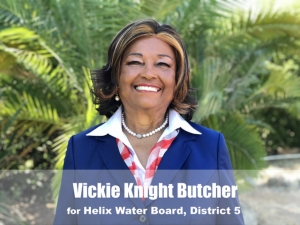 October 27, 2020 (San Diego’s East County) – In a Zoom interview with East County Magazine, Vickie Knight Butcher, J.D. shared concerns over the impacts of COVID-19 on families in the Helix Water District and her hopes to make water rates equitable based on family and lot size, as well as water usage. Butcher, who has extensive state and international experience in water policy, also wants to hold down water rates and have any rate change proposals considered annually with full public input.

Butcher is running in district 5 against Director Joel Scalzitti and two other challengers who did not file ballot statements (Luis Tejeda and Tyler Logan).  ECM previously interrviewed Scalzitti; view video of his interview. District 5 covers the eastern portion of the Helix district including portions of El Cajon, Granite Hills, Bostonia and Lakeside. View map.

“I have had water as my passion for a number of years,” says Butcher. I have served on many boards and commissions at the city, county, state, national and international level…and I’m  committed to making my community a better place to live.”

Several years ago, the Helix Water District shifted its long-time holding of annual rate change hearings to instead allow the board to approve rate changes five years at a time.

“I am for responsible considerations, discussions and transparency,” has Butcher. “I think that the public has a right to hear how the board discusses the issue of rate hikes, because it affects them.” She notes that life has changed greatly since the five-year approval plan was adopted over considerable public objection at the time. “Now we are dealing with COVID-19…an extraordinary time in our history when families are all challenged,” Butcher states.  “I would do everything possible to keep rate hikes down.”

She acknowledges that she would be “one vote” on a five-member board, but adds, “I would certainly listen to the people and hear what their concerns are and be their voice.”  In considering any rate changes, she would ask, “Are they affordable for the constituency?”

Helix, unlike neighboring Padre Dam Municipal Water District, has long assessed rates based on water usage, so those with large families or large lot sizes are generally put into the highest water rates tier regardless of their conservation efforts or the need to water trees or landscaping to prevent brush fires or slope failure.  Butcher wants to change that.

“It isn’t fair to those actively trying to cut down on usage to be charged the same regardless. Let us consider family size. Let us consider lot size,” she says, adding that conservation and water usage levels should be factors as well in determining water rates.

As for the post-COVID era, she says, “We can and should appreciate the value of sone of the fallout of this incredibly difficult time.  I do believe that virtual meetings and evening meetings are positive things.  This allows working people to participate, to hear, and to be a part of the issues and how they are discussed and resolved. Iit is a part of transparency.”  She notes that prior to COVID 19 “We didn’t zoom at all and now Zoom is the new normal.” She supports keeping live access to meetings online even after the pandemic for people to watch from  home or work, as well as posting recordings of meetings online for working people to watch at their convenience. “It’s not a problem because of the technology available.”

She supports the Helix Water District’s efforts to expand water storage and its water purification efforts. She also wants to look at grey water utilization and support educating the public on water-wise landscaping.

While serving on the state’s Water Quality Control Board, she traveled the length of the Colorado River to get a firsthand view of how our arid region obtains water. While working for the chair of the County Board of Supervisors, she worked on regional issues including San Onofre nuclear waste.

As Executive Director of the nonprofit Water for Children Africa, she’s headed up teams bringing safe, sustainable water to rural villages and schools in African nations, helping communities drill wells, add or repair infrastructure and water catchment systems. She’s also led a team to places like Imperial Valley  Irrigation District, where she learned how watering can be fine-tuned to irrigate a section of a field with the push of a button.

Butcher supports Scalzitti’s successful effort to save the Lake Jennings campground from closing down.  “I believe that is an excellent resource for the community and I would very much commit to keeping it open and seeing if we could, how can we improve it,” she says of Lake Jennnings.

She disagrees with Scalzitti’s actions on a committee that sought to require water board members to inform the board if they spoke to the media and penalize those who didn’t by revoking committee memberships and/or withholding per diem payments.

“I definitely believe that First Amendment rights should be extended to the board of directors” as well as to public speakers, she told ECM. “If there are concerns then those should be aired publicly, openly and transparently…I don’t think that it should be penalized.

She and her late husband, Dr. Richard O. Butcher, raised their five children at their home near Granite Hills High School, where he was team physician. The family has lived there for over 37 years. “It has been a wonderful experience. It is a pleasure to be a long-term resident of East County,” she says.

As for her depth of experience in water issues, governmental boards and community service, Butcher concludes, “The learning, exposure and the participation on boards and commissions I believe have given me an extraordinary opportunity and ability to learn and be an effective board member.”