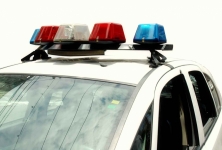 A call shortly around 2:50 a.m. to the Sheriff’s dispatch reported a dirt bike theft on Loma Drive in Lemon Grove, according to Lt. Jim Emig. Deputies spotted a “suspicious vehicle,” a Dodge Durango SUV, leaving the area.The driver refused to stop for law enforcement and instead, fled onto State Route 84 and Interstate 805.