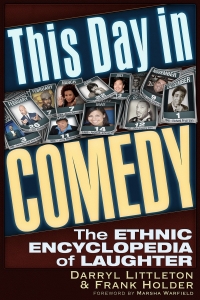 This Day In Comedy: The Ethnic Encyclopedia Of Laughter, by Darryl Littleton and Frank Holder (Trineday, Walterville. Oregon, 2019, 491 pages).

“The elixir of life is a bubbling stream of laughter.”

December 7, 2019 (San Diego)-Darryl Littleton and Frank Holder, two aficionados of humor and comedy, has written the quintessential book on comedy; This Day in Comedy: The Ethnic Encyclopedia of Laughter. They actually set the framework for this groundbreaking and insightful book in the preface, as they state: “I’ve always wanted to see comedy argued in a barber shop the same as sports is discussed.” After reading this informative and iconic book, they just may get their wish.