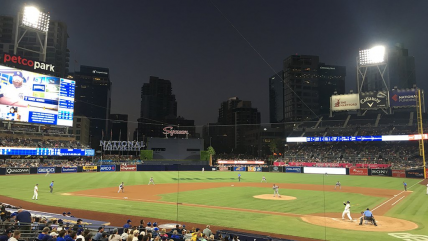 September 29, 2016 (San Diego) - Hunter Renfroe and Wil Myers led the Padres to a series win in a leap frog battle against the Dodgers.  It’s hard to believe, but they were going for the sweep tonight in the home series finale (and Dick Enberg’s last game) with Christian Friedrich on the mound against the rookie Juan Urias.

The Padres started things up with help from the rookies again. Carlos Asuaje singled to score Hunter Renfroe and San Diego took a 1-0 lead.  Luis Sardinas singled to score Derek Norris and the Pads led 2-0.

But the Dodgers came right back in the fifth on a double from Joc Pederson that scored Rob Segedin and the score was 2-1.

Carlos Ruiz doubled in the seventh and scored two and the Dodgers led 7-2.

In the eighth, the Dodgers added one more.  After a double by Andrew Toles, Andre Ethier singled to drive him in and the Dodgers led 8-2.

In the ninth, they added one more too.  Toles singled and scored Micah Johnson and the Dodgers took a 9-2 lead.

The Padres started a bit of a rally in their half of the ninth.  Jon Jay singled up the middle and drove home Manuel Margot and the score was 9-3.  Yangervis Solarte doubled to score Jay and the score was 9-4.  But the Dodgers hung on to prevent a sweep and steal Dick and the Padres’ thunder on their last night at home.

The Dodgers leave and the Padres head out to take on another NL West foe for their last series of the season:  the Arizona Diamondbacks.  Game time is 6:40 p.m. and Braden Shipley will be on the mound for Arizona against Edwin Jackson for San Diego.