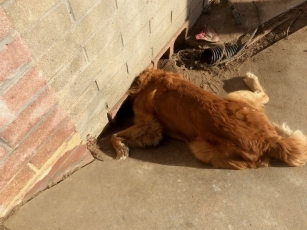 October 10, 2017 (Lakeside) – Sometimes, retrieving has its pitfalls.  After a three-year-old golden retriever got his head stuck under a brick wall while chasing a ball, Lakeside firefighters came to the rescue.

The crew from Engine 2 freed the trapped dog which seemed no worse for the wear.  “Upon release, he resumed chasing the ball,” Lakeside Fire reported on its Twitter feed.