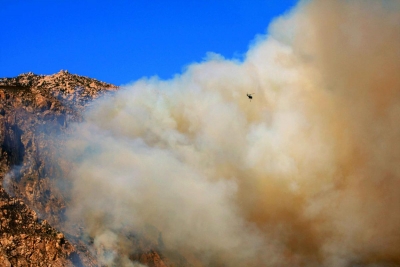 Now the Sheriff and Cal-Fire have released details of the harrowing ordeal, revealing how two deputies risked their own lives to save others.  They narrowly escaped, as flames burned so close that one rescuer leaped onto a landing skid and hung on as the chopper descended 3,675 feet to the valley floor.

Both ASTREA 1 and Sheriff's Copter 10 had already been fighting the fires when a 911 call came in. ASTREA 1, with a flight crew of Deputy S. Bligh (pilot) and Deputy G. Kneeshaw (tactical flight officer), performed a rescue of two experienced hikers, a man and a woman, who were in danger of being overtaken by rapidly advancing flames.

At the time of origin, the hikers believed they were an adequate distance from the fire and elected to "shelter in place." Later, the hikers made a 911 call to the Sheriff's Communication Center to advise they were now threatened by the flames and asked for assistance.

Sheriff's Copter 10 (fire fighting helicopter) was in the area of the hikers but the smoke was obscuring visibility and it was unclear whether or not the hikers could be reached. ASTREA 1 arrived in the area and with the assistance of Copter 10, located the hikers within about 50 yards of the flames.

Deputy Bligh performed a "toe in" landing on the hillside and the female hiker was loaded into the helicopter and flown to the valley floor. Deputy Kneeshaw (the TFO) remained behind on the hillside with the male hiker.

The flames quickly moved upslope and forced Deputy Kneeshaw and the male hiker to flee westbound along the rugged hillside. Deputy Bligh returned to the area and performed a second "toe in" landing.

"It is clear to me after flying the fire today and seeing where these civilian were:  they both owe their lives to Mr. Bligh and Mr. Kneeshaw," said Cal-Fire Captain and public information officer Mike Mohler. "Both should be recognized for their valorous actions."

Both hikers were reunited and no one sustained any injuries.