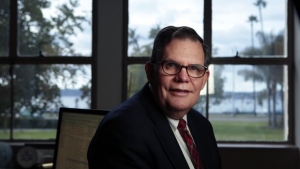 Dronenburg collected 59% of the vote in this week’s Primary election. He was endorsed by Republicans.  He beat out Susan Guinn, a Democrat who received 30% of the vote.

Johnathan Gordon and George Mantor got 7% and 4% respectively.

The normally low-profile race drew attention because Dronenburg found himself in the midst of controversy after the Supreme Court ruled Prop 8 to be illegal and Dronenburg delayed commencing same-sex marriages to obtain clarification on some points. This drew criticism from gay rights groups, who launched a “Dump Dronenburg” campaign.

His primary opponent, Guinn, is gay and married to her same-sex partner.

Guinn’s campaign contended that San Diego had one of the state’s highest rates of complaints for unresolved property tax assessment appeals, while Dronenburg touted his office’s high customer satisfaction ratings.