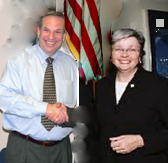 April 1, 2011 (San Diego) East County Magazine has learned that the Democratic Party will announce a surprising endorsement next Monday in the 2012 San Diego Mayoral Race.

A prominent Democratic source and Wikileaks have leaked documents to ECM indicating that Democrats will endorse not one, but two candidates running as a team: Congressman Bob Filner and State Senator Christine Kehoe, in a first-ever co-mayoral candidacy.

At a press conference on Monday, Jess Durfee, chair of the San Diego Democratic Central Committee, will reveal that San Diego has been chosen as the first city in the nation to test this revolutionary change in National campaign strategy for mayoral elections. According to Durfee, “This will ensure more efficiency for cities of all sizes across the nation without increasing costs to taxpayers.”

He added that due to the redistricting and open primary format of the 2012 election, “Democrats must start campaigning now to ensure victory.”

A secret draft of a press release to be issued jointly by the Filner-Kehoe campaign states:
“We are offering voters a unique and fiscally responsible opportunity to handle San Diego’s many important issues: Two mayors for the price of one.”

“Two mayors? Interesting idea, what would they do, share a salary?” San Diego Supervisor Ron Roberts inquired upon hearing of the unusual tactic.

A Filner-Kehoe campaign insider disclosed a strategy to divvy up duties geographically, with Filner focusing on areas south of I-8 and Kehoe taking on the north-of-8 regions.

The normally conservative-leaning San Diego Taxpayers Association issued a statement approving the concept of giving taxpayers more for their money “provided that winners won’t double-dip on pensions but instead will divide the mayoral pension or flip a coin to see who gets retirement benefits.”

Speculation has been brewing in recent weeks that Filner is considering a mayoral run and plans to leave Congress when his term ends in 2012. Kehoe, prohibited by term limits from running again for state senate in 2012 , has also been considered a strong candidate to throw her hat in the ring.

Deborah Seiler, the San Diego Registrar of Voters, commented, “Such a co-mayoral run is unprecedented in San Diego history.” She added that while unusual, her staff could find no statute to prohibit such a move.

Sheila Jackson, San Diego Board of Education member applauded the idea. “Good! The interests of San Diego children would be well represented by Filner and Kehoe in this capacity.”

Bonnie Dumanis, San Diego District Attorney and possible Republican mayoral candidate in 2012, gave this reaction over the development. “I must say that this is a complete shock to me.” Asked if she might consider legal action to block the two-for-one option for voters, Dumanis pled the fifth.

When asked if the Democrats have a team of candidates willing to campaign on behalf of the co-mayoral candidates, Durfee grinned and stated “We are assembling our `dream team.’”

One concern among party insiders has been who may replace Congressman Filner in Washington and keep the seat in Democratic hands. Today, one of San Diego’s most popular Democrats tossed her hat—or should we say surfboard—into the ring: Donna Frye announced plans to run for Filner’s Congressional seat with a goal to “clean up Congress the way we cleaned up our local beaches.”

A Republican party source revealed that the GOP plans to respond by proposing that the heavily Hispanic and predominantly Democratic Congressional district be eliminated entirely.

Asked how Republicans plan to accomplish that, the source replied, “Our Tea Party Republicans in Congress plan to propose annexation of San Diego's South Bay region by Mexico, along with other liberal districts along the U.S. border. We are confident that our plan, if adoped, will reduce both immigration costs and the number of Democrats in Congress."