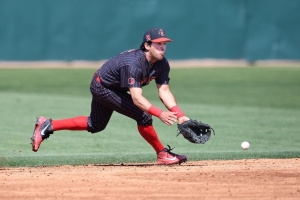 ECM Sports will have live coverage of today's rubber game between SJSU and SDSU at 1 p.m.  Follow @ECMagSports on Twitter for live updates and coverage.

May 5, 2019 (San Diego) - The San Diego State baseball team scored all nine of its runs over a three-inning span to defeat San Jose State, 9-7, at Tony Gwynn Stadium on Saturday night. The Aztecs clinch a series win and have a chance of a sweep tomorrow after tonight's victory improved their record to 28-19 (13-9 Mountain West). The Spartans fall to 19-28 (12-11 MW).

Facing a 2-0 deficit, Chad Bible's fifth home run of the season set the tone for a five-run, five-hit second inning that gave the Aztecs a 5-2 edge. After Bible homered, Jacob Maekawa and Matt Rudick hit back-to-back RBI singles. Later in the inning, Casey Schmitt drew a bases-loaded walk and Angelo Armenta hit a sacrifice fly to cap the second-inning outburst.

The Spartans immediately responded with four runs of their own in the top of the third, but the Aztecs continued to swing the bats well in the early stages, posting a three-run third inning to take an 8-6 lead. A Spartan error allowed SDSU to tie the game at 6-6 before Schmitt recorded a go-ahead 2-RBI single to center to score both Rudick and Maekawa.

The Spartans threatened in the top of the fourth, loading the bases with a hit by pitch and back-to-back walks. Brian Leonhardt then took over on the mound for SDSU and proceeded to battle back from a 3-0 count to strikeout SJSU's Aaron Pleschner to end the threat.

SDSU increased its nation-leading double play total to 56 with a pair of twin-killings on Saturday night. Both came in crucial parts of the game, as a 5-3 double play featuring an impressive swipe tag by first baseman Jaden Fein got SDSU out of a two-man-on jam. In the next inning, Leonhardt induced a bases-loaded ground ball against Pleschner for a 4-3 double play turned by Maekawa.

Schmitt made the move from third base to the mound in the eighth inning and recorded his seventh save of the season with two innings of shutout relief with three hits allowed. Schmitt also led the Aztec lineup, reaching base four times in a 2-for-3 performance at the plate with a game-high three RBIs.

Despite allowing 10 walks and three hit by pitches, the Aztecs were able to strand 18 Spartan runners on base.

Jacob Flores (2-1) earned the win, pitching one inning of shutout relief, while SJSU starter Tevin Cadola (5-2) was dealt the loss after allowing 10 hits and six earned runs in three innings of work.