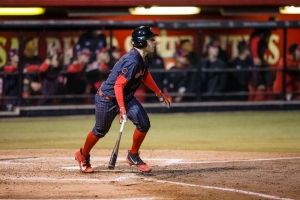 April 13, 2019 (Fullerton) - The San Diego State baseball team extended its winning streak to a season-best five games and clinched its first series win at Cal State Fullerton since 1965 with a 10-4 win over the Titans on Saturday night at Goodwin Field. SDSU improves its record to 21-14, while CSF drops to 14-17.

The Aztecs scored nine runs before the end of the third inning to jump out to a 9-0 lead with three runs in the first and a six-spot in the third. Julian Escobedo opened up the scoring with a solo home run in the first, giving the junior outfielder his fourth home run of the season and his second of the series. Brian Leonhardt and Chad Bible both logged RBI singles before the completion of the three-run first inning.

Casey Schmitt and Angelo Armenta led off the third inning with a hit by pitch and single, respectively, before Leonhardt drove both in on his team-leading 14th double of the season. Jaden Fein drove in Leonhardt on an RBI single just before Mike Jarvis brought in a pair on a 2-RBI single to left field. Matt Rudick capped the six-run third inning with a single through the right side, scoring Jarvis.

After being held scoreless from the fourth to the sixth, Ryan Orr tripled to right field allowing Devyn Lopez to score from first.

Fullerton faced a 10-1 deficit heading to the bottom of the seventh but scored a pair of runs to cut the lead to 10-3.

SDSU returned the favor and then some in the eighth, recording three runs with Leonhardt logging his fourth RBI on an unassisted groundout to first and a two-run single by Lopez.

SDSU starter Harrison Pyatt, making his first appearance since March 9, pitched a scoreless first inning. Michael Paredes took over for the Aztecs in the second and pitched the next 3.2 innings, allowing four runs on eight hits with four strikeouts and one walk.

In addition to his four RBIs at the plate, Brian Leonhardt earned his first collegiate win on the mound, allowing just one hit over 2.1 innings pitched. Leonhardt worked around three walks, allowing two runs in a 46-pitch outing.

Jacob Flores performed well out of the bullpen for the second consecutive day, allowing just one unearned run in the game's final two innings.

Six Aztecs recorded two hits each, including Escobedo, Schmitt, Leonhardt, Bible, Orr, and Jarvis. The Aztecs went 10-for-23 (.435) with runners on base, 7-for-16 (.438) with runners in scoring position, and advanced runners on 17 of a possible 26 opportunities.