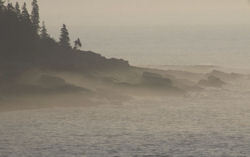 Written and edited by Roddy Scheer and Doug Moss
July 26, 2012 (San Diego) -- Dear EarthTalk: I was appalled by the pollution haze I saw on a recent visit to Acadia National Park in Maine, and was told by a ranger that it was from smokestacks and tailpipes hundreds of miles away. Is anything being done to clear the air in Acadia and other natural areas where people go to breathe fresh air and enjoy distant unobstructed views?                 -- Betty Estason, via e-mail
This pollution haze, which emanates from urban and industrial centers to the south and west, has been a problem at Acadia National Park and elsewhere (e.g. Great Smoky Mountains, Shenandoah and Voyageurs national parks) for decades despite a 1977 Congressional dictum calling for the nation’s greatest natural treasures—known as “Class 1” areas—to be free of the unhealthy air plaguing cities. The haze is caused when tiny pollution particles absorb and/or scatter sunlight before it reaches the ground, reducing the clarity of what we see. According to the National Park Service (NPS), which is working with other agencies and state governments to help remedy the situation, “Some types of particles, such as sulfates, scatter more light than others, particularly during humid conditions,” reports the NPS.

Of course, the pollution in the air causing the haze is also not good for our health or the environment. “Exposure to very small particles in the air has been linked with increased respiratory illness, decreased lung function, and even premature death,” reports the NPS. Also, the most common particles, nitrates and sulfates, contribute to acid rain, which renders some water bodies unsuitable to support aquatic life.

Analysts with the Mid-Atlantic/North East Visibility Union (MANE-VU), a regional planning agency with representation from all Northeastern and Mid-Atlantic states as well as two tribes and four federal agencies, calculated that 100 miles in visibility should be the norm throughout these regions but that 40-60 mile visibility is typical today because of pollution. They also warn that haze can reduce visibility to just a few miles at times. The fact that these problems exist in natural areas hundreds of miles from the sources of pollution is particularly troubling to environmentalists, park visitors and seekers of fresh air.

In November 2011 the U.S. Environmental Protection Agency (EPA) agreed to finalize requirements for states to create haze pollution clean-up plans—those first called for in 1977. These plans will require the worst polluters to install “Best Available Retrofit Technology” (BART) to clean up particulate pollution.

But a recently proposed addendum would allow 28 eastern U.S. states to avoid direct compliance, since they are already required to cut emissions through the Cross State Air Pollution Rule (CSAPR). “While the emission trading program created by CSAPR will result in significant air quality benefits for many eastern states, it will not require some of the most egregious polluters of iconic Class I national landscapes to clean up their pollution to the same level that would be required under BART,” reports the National Parks Conservation Association, which would like to see EPA drop its proposed BART rule exemption.

Readers can do their part by using less energy and making sure some of the power offered by their utilities comes from renewable sources. And stay away from haze-prone locales on humid days when conditions are ripest for the formation of particulate pollution and the negative health effects that can come with it.