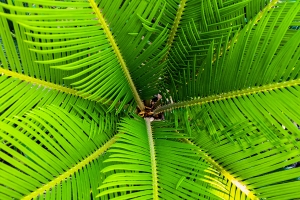 By Roddy Scheer and Doug Moss

While many of us thought Ronald Reagan sounded crazy back in 1981 when he told America that “trees cause more pollution than automobiles do,” the then-President may have been on to something.

Researchers from the University of California at Berkeley recently unveiled the results of a study in which they determined that certain trees and plants common in Southern California off-gas natural yet nevertheless harmful volatile organic compounds (VOCs)—to attract pollinators, protect against environmental stressors, and repel herbivores—especially during the hottest months of the year. This so-called particulate matter pollution is not only dangerous in and of itself to breathe in as the tiny molecules can get lodged in the lungs, but it also leads to the formation of ground-level ozone and smog.

While Reagan’s comment may have been an utter falsehood back then, who knew it would take the electrification of the transport sector to make it actually ring true today? The only way researchers could have any way of knowing that these plants are a significant contributor to air pollution would be by the elimination of the vast majority of fossil-fuel-derived “background noise” that we are no longer subject to as we breathe in the air around the streets of California—where the nation’s strictest automotive fuel efficiency standards have driven many to Teslas, Bolts, Volts, Leafs, Polestars, e-Trons, Priuses and other green rides—and elsewhere.

The researchers found that over the past two decades, concentrations of these VOCs fell by 50 percent between 1999 and 2012, and then to undetectable levels during the cooler months thereafter. But when the mercury rose, even without additional automotive emissions, so did concentrations of airborne VOCs. Four out of five excessive heat days (with air temps topping 100℉) led to unsafe VOC levels outside.

With transportation emissions off the hook as the culprit, researchers looked to the plant community for answers. One of the worst offenders is the iconic and ubiquitous fan palm, but sycamores, poplars, willows and many oaks and pines also off-gas their fair share of VOCs when the weather heats up — which will be happening more frequently as we warm the atmosphere with greenhouse gases. Backyard planners and landscape designers concerned about air quality and the environment might want to steer clear of these species when choosing plants.

“I am not suggesting that we get rid of plants, but I want people who are thinking about large-scale planting to pick the right trees,” says Ronald Cohen, the Berkeley atmospheric chemist who led the research effort. “They should pick low-emitting trees instead of high-emitting trees.” If you have the luxury of choosing which trees to plant and/or replace, and you care about your community’s air quality, some good choices include alders, magnolias, manzanitas, birches, hazelnuts, gingkos, apples and elms.