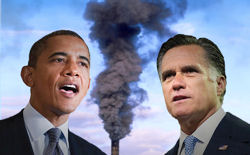 October 10, 2012 -- Dear EarthTalk: Given that the presidential election is just around the corner, what can you tell me about each candidate’s environmental track record and positions?          -- Jane Miller, Chicago, IL

Just because the environment is getting short shrift this election season due to our nation’s lingering economic woes doesn’t mean that candidates Obama and Romney can ignore the issue.

Environmentalists have cheered several of President Obama’s moves during his first term, including: passage of the Recovery Act and its funding for environmental and habitat restoration and water quality improvements; passage of the first comprehensive National Policy for the Stewardship of the Ocean, the Coasts and the Great Lakes; and the signing of the Omnibus Public Lands Management Act of 2009, which expanded land protections and water conservation across two million acres of federal wilderness.

On the downside, green leaders dismay Obama’s lack of follow-through on a 2008 campaign promise to label genetically modified foods so that consumers know what they are getting when they buy corn, sugar or breakfast cereal. Also, a 2011 Obama decision to deregulate the planting of genetically modified alfalfa and sugar beets incensed organic farmers and environmental leaders. Greens also worry about Obama’s enthusiasm for an “all-of-the-above” energy policy that includes the practice of hydraulic fracturing (“fracking”) to access natural gas in shale beds under wide swaths of the northeast and western U.S.

If re-elected, Obama would no doubt work to expand U.S. leadership on setting emissions limits in unison with other nations, and has pledged to continue to reduce our dependence on oil so as to lower greenhouse gas emissions. Conservationists are also hopeful that Obama will set aside threatened lands for protection from development as both Bill Clinton and George W. Bush did soon before leaving the White House.

While Mitt Romney doesn’t have much of an environmental track record from his days as Massachusetts’ governor, he did get kudos for being open minded to both regulatory and market-based policy ideas. He also supported a 2003 northeastern states agreement to reduce carbon emissions from power plants via a regional cap-and-trade emissions reduction plan. But in 2005 Romney abruptly pulled Massachusetts out of the plan, telling reporters that it didn’t protect businesses and consumers from increased energy costs.

Romney is now pitching an energy plan that that embraces all the options, including fossil fuels, nuclear energy and renewables. But he recently told ScienceDebate.org that he opposes any kind of carbon tax or cap-and-trade system “that would handicap the American economy and drive manufacturing jobs away,” adding that economic growth and technological innovation, “not economy-suppressing regulation,” are key to protecting the environment in the long run.