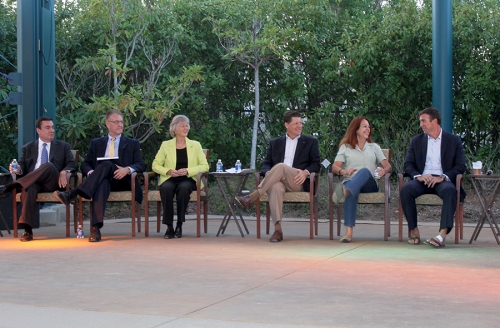 Story and photos by Sharon Penny

August 8, 2014 (El Cajon)--Six East County politicians participated in a lively question and answer session under the stars at Cuyamaca College's Water Conservation Garden during a mild summer evening on August 7.

The location for the annual event hosted by the joint Chambers ofCommerce in East County was apropos because the state’s water issue was a hot topic discussed by local leaders. The site exemplified ways that constituents could help with the current drought. Other issues debated at the event were welfare, immigration, the local craft beer industry, using public pension funds to invest in affordable housing, providing incentives to private developers, Proposition 13, high-speed rail, and even Shamu.

Before the “Politics in Paradise” program, which was held in the garden's amphitheatre, local business leaders, educators, healthcare executives, and elected officials mingled while dining on a variety of food and drinks provided by local culinary vendors. 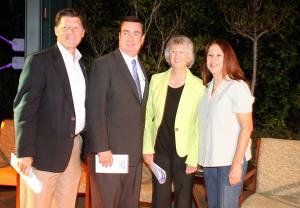 The panel event began with John Bolthouse announcing that the U.S. had bombed ISIS terrorist artillery in Iraq. He led the pledge of allegiance and stressed the importance of unity given the international actions.

The panelists did not address the military action or other international issues, however, and unity proved short-lived among the elected officials.

The first question of the evening focused on Assemblywoman Lorena Gonzales' proposed bill to provide diapers for low-income parents of babies. All of the Republicans on the panel were against it, ranging from vehement opposition by Hunter and Jones, to a qualified response from Anderson.

"I voted against it, as we can't determine if the money would be spent on diapers, and not subverted to other things, such as alcohol or drugs," said Anderson. "I want to see a return on results, and children's lives lifted. I could support it of we tie it to results."

Hunter was adamant that he did not support additional “welfare” programs.

"We spend enough on welfare. Period No more!" he said. "Having a child is a choice; you are then responsible." He cited welfare statistics, misleading the audience that it was far more expensive than defense spending. (Defense accounts for 22% of the 2014 federal budget, while welfare accounts for 11%.  Source: http://www.usgovernmentspending.com/federal_budget_pie)  Hunter included in those statistics Social Security benefits and tax rebates as "welfare programs,” which they are not.  Social Security is paid into by working people to provide benefits when they retire.  Tax rebates can be refunds on an overpayment of taxes or rebates approved by legislative bodies, such as rebates to stimulate business growth, the economy, or encourage energy efficiency.

Sessom was the only leader sympathetic to the diaper program, but being concerned about landfill issues and the environment, favored diaper services over disposable diapers.

The legislators differed on other issues. The question of using public pension funds as investments for affordable housing was considered reasonable (if due diligence proved they were good investments) by both Treasurer Dan McAllister and Supervisor Jacob, as well as Sessom. The others seemed opposed to affordable housing mandates.

Immigration was a hot button issue here, as it is nationally. Hunter, Jones and Jacob emphasized that San Diego had few illegal immigration problems (excluding far portions of East County) due mainly to securing the border here, which was spearheaded by Hunter's father, Duncan Hunter, Sr.  Jacob pointed out that of the 60,000 recent immigrant refugees flooding the borders elsewhere, San Diego received only 415 unaccompanied minors. The Republicans who spoke seemed to agree that a national fence was needed across the country.

California’s water issues were discussed at length. The conservative members present said surface storage was the number one issue, but environmentalists oppose it. Hunter pointed out that recently the House, Senate and the President passed a water authorization bill, a nonpartisan consensus that is “something that is unheard of in the last couple of years.” His emphasis was that the issue was beyond partisan squabbles.

There was agreement on issues such as welcoming reduced regulations on the craft beer and wine industries in the county, protecting Proposition 13, providing incentives to private developers in public/private partnerships, and opposition to the high-speed bullet train (with Sessoms not commenting on this state issue). But some used these discussions to accuse the current Presidential administration and Democrats in both Congress and at the State level of creating policies that they feel are detrimental to the country.

Hunter was dismissive of President Obama as a leader of "mediocrity." "We are a Christian nation," said Hunter in his closing remarks. He emphasized Christian values and a strong national security as paramount for the nation.  (The U.S. Constitution, it should be noted, guarantees freedom of religion to all Americans, regardless of their faith.)

Jones, who like Hunter, spent much of the evening bashing Democrats in leadership roles, concluded that he sees a difference in local Democratic politicians and residents compared to federal and state politicians. He specifically pointed out Sessom as an example of someone he respects.

Many others, including McAllister and Sessom, emphasized community input and involvement. McAllister even gave out his cell phone number with the plea to contact him with questions or ideas.