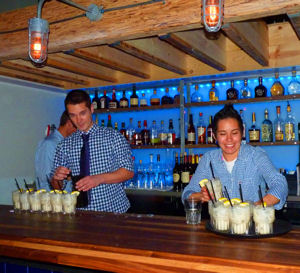 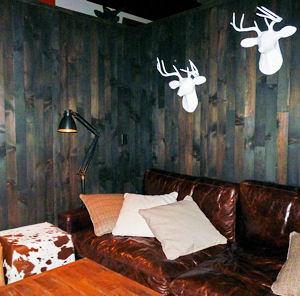 By Miriam Raftery
February 26, 2012 (La Mesa) –Judging from the crowd on a recent Wednesday night  at Gingham’s,  the restaurant has emerged as a new hot spot in La Mesa Village. Occupying the space formerly home to Gio’s, the new establishment features a remodeled interior and a dramatically different menu cooked up by celebrity chef Brian Malarkey, a finalist in Bravo TV network’s “Top Chef” competition. 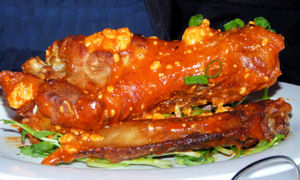 I checked out the fare at a recent press dinner, where media members were invited to gorge ourselves on a wide array of samplings in what Malarkey bills as a “feast in the East.”
Remodeling changes include moving the entrance to create an expanded foyer, raising the roof on the original bar area to expose the barrel ceiling, and enclosing a patio room with newly added second bar.  I miss the fireplace and the wine barrel tables that provided a cozy ambience at Gio’s, though the new arrangement allows for more seating of large parties—ideal for sharing the ample fare served up.
If you thought the “urban cowboy” theme went out with John Travolta, think again.  Gingham’s sports a Western theme with updated twists;  animal heads mounted on walls and a chandelier made of guns and 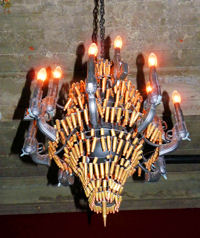 bullets are interspersed with urban elements including a blue glowing bar and roll-up windows open to the street on sunny days. The ambience aims to draw in a younger crowd, while hearkening back to La Mesa’s western roots in this centennial year. 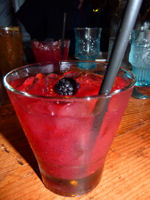 Our feast started with signature drinks including lemon poppy seed soda and berry smash—a concoction provided by Snake Oil Cocktail Co.  Appetizers included zesty “horny devil eggs”, smoked salmon chips and savory fried oysters.
The main dishes live up to Gingham’s reputation as a mecca for meat eaters. My favorites were the Kobe beef “double shot BBQ” ribs with collard greens, succulent and tender.  Other entrees offered up including “smokey” turkey  with blue cheese, bacon and fig jam (which got rave reviews from my dining companions; I couldn’t sample this due to an allergy) , “oil boil” butter chicken, and  a whole blackened catfish.
Other options not served up at the press dinner include a variety of game dishes and exotic meats, such as Venison Carpaccio and Duck Confit appetizers, baked Gator Andouile with crawfish, pheasant sausauge, and elk and apple sausage. You’ll also find an array of burgers and sandwiches, notably the GingHAMburger with bacon, smoked cheddar and a sunny-side egg.
Those with a sweet tooth will find plenty to satisfy it here, where decadent desserts include a candy bar cake, lemon meringue cake and fudge pretzel Sunday, to name just a few. 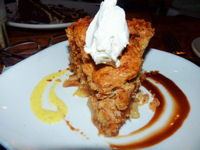 My main suggestion for the clearly talented chef at Gingham’s is to offer up some more healthy fare for those who don’t wish to feel their arteries harden as they eat. Too many of the dishes came fried—even the Brussels sprouts. Despite the many dishes offered up for tastings, the only piece of fruit in sight was floating in a cocktail. As a former nutrition industry editor mindful of the merits of healthy eating, I’d advise the owners to cook up some creative dishes for those who enjoy healthy eating.  After all, even the most avid carnivore may have a health-conscience family member.
I was pleased to see some beers from local breweries on the menu including Stone, Firehouse and Ballast Point, as well as Julian Hard Cider. It would be good to see some local wine vintages added as well, though there are some decent California vintages from other areas.
Gingham’s lives up to its reputation as a happening spot as well as a haven for meat-lovers of all ages.
Gingham restaurant is located at 8384 La Mesa Blvd., La Mesa, CA 91942.

Miriam, I wholeheartedly agree with you about the menu at Gingham's. I recently had dinner there with a large group. As the lone vegetarian in the group and apparently the only person who doesn't consume anything fried, my choices were pretty much limited to one of the two salads. Having said this, the salad was quite nice. I understand what Gingham is trying to do and I don't demand that it be all things to all people. But you are right that in any family or group, not everyone consumes meat or high calorie/white flour/white sugar items. Perhaps just a line in the menu that steamed vegetables or some similar option is available would be great.

I highly comment Gingham's on their service. Our group was there on a busy night and we were not easy to serve. Our waitress Nicki kept track of everything, was cheerful, speedy, and knowledgeable with excellent suggestions. Service was provided with a smile. She even recalled menu items one member of the group had ordered on a previous visit she made with another group several weeks before. Wow, that blew us away!