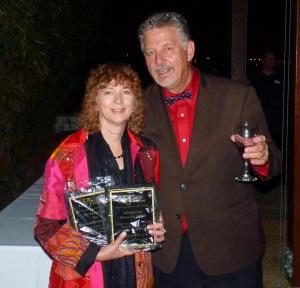 This award goes to journalists whose work not only meets ethical standards but also shows uncommon sensitivity to issues. Winners pursue truth in the face of such obstacles as unpopularity, economic retribution or physical harm.  This story, written by Raftery with photos by Pelley and Ewing, documented serious safety concerns.  Pelley and Ewing later obtained a restraining order against the wind project manager, who was caught on tape making a profane and violent threat against Ewing.  The team shares a $250 cash prize.

The second place award was for “Save community planning groups,” which focused on County Supervisors’ efforts to eliminate planning groups as part of recommendations from a developer-stacked Red Tape Reduction Task Force.  Her work on this issue was previously recognized by the San Diego League of Women Voters, which presented Raftery with its Media Award 2012.

“Silence of the lambs,” Raftery’s article on  the U.S. Department of the Interior’s decision to issues take permits allowing the killing of bighorn sheep in the path of the Ocotillo wind project, received an honorable mention in the Environmental reporting category.

Since its inception in 2008, East County Magazine has received over 50 journalism awards, including many of the local journalism community's top prizes, beating out well-funded corporate media competitors.

“I am honored to receive recognition for our reporting on energy, land use and environmental issues,” said Raftery, who holds a degree in Environmental Studies from U.C. Santa Barbara.  “Millions of acres of our public lands are slated for destruction for industrial-scale renewable energy projects, without concern for the devastating consequences on the environment, wildlife, or the health and safety of people living nearby. I hope that other journalists will be inspired to investigate the claims made by so-called `green’ energy projects and to ask why policies pushed forward by energy corporations are being given precedent over policies that would favor renewable projects on a human scale, located near where power will be consumed instead of in remote pristine mountain and desert lands.”

Miriam, the photographers and the entire staff of ECM earn this award every day in their non-stop hard work and writing excellence.

ECM provides a voice for those who would be ignored or silenced,  especilally residents of the small East County communities whose lives are disrupted by  border  and energy issues. And the fires. When does the Mainstream Media cover Ocotillo, McCain Valley or Jacumba? Tierra Del Sol?

Congratulations Miriam for your achievement(s)!

It's good to see your hard work recognized - and that of the photographers, too.

It's good to see your hard work recognized - and that of the photographers, too.