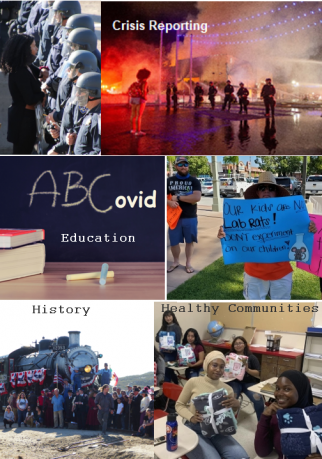 “I’m proud of our team of hard-working journalists, who went above and beyond the call of duty to report during tumultuous times,” says ECM editor Miriam Raftery. “I also want to thank the Facebook Journalism Project grant, which supports local journalism and funded our reporting on most of this year’s winning entries amid the COVID-19 pandemic.”

This year’s Press Club awards program drew more than 1,100 entries, making it one of the largest journalism competitions in the nation. Judges for the Press Club’s entries included members of 15 journalism professional organizations from around the country, including press clubs in San Francisco, Los Angeles, New Orleans, Rochester, Florida, Cleveland, Orange County, Milwaukee, Tulsa and Alaska.

Raftery and Kruze won first place in the education category for “Cajon Valley School District spends over a half mllion dollars on promotional videos.”

In the photography category,  Henri Migala won second place for documenting the protest in La Mesa, including his own ordeal in “Photographer hit by pepper spray shares front-line experience covering protest in La Mesa.”

Jake Rose received an honorable mention for his photo essay, “Witness to Chaos,” covering the La Mesa riot including video of arsonists in action.

More than 500 awards in 130 categories and 10 divisions were announced. The online awards program streamed live from the San Diego Automotive Museum in Balboa Park on Facebook and Twitter.

“The San Diego Press Club Excellence in Journalism Awards celebrates professionals whose research, writing, reporting and visual skills shed light on newsworthy topics that matter to us all,” said Albert Fulcher, 2020 Press Club president. “At a time when many Americans distrust the news media, I am proud of our organization’s 400 members and their commitment to truth and fairness with integrity, high standards and ethical reporting. I am also proud of our success at uniting journalism and public relations professionals, while providing career-enhancing programs and networking opportunities for our members.”

Best of Show awards include:

St. John retired in January 2019, after working in news roles at KPBS since 1991. During her reporting career at KPBS, she worked in various roles, including as Morning Edition anchor, North County reporter, news editor and Midday co-host. She won awards from the San Diego Press Club, Society of Professional Journalists, Associated Press TV and Radio Association and California Golden Mike Awards. As an Oceanside resident, she also served as KPBS’ North County bureau chief. She covered such stories as nuclear waste issues at San Onofre, North County politics and homeless veterans. Currently, she continues to fill-in as host of KPBS shows “Roundtable” and “Midday Edition.”

Velasquez spent 27 years working in TV news, starting in 1974, producing public affairs programming and then reporting on-air for three local stations, KNSD-TV, KGTV and KFMB-TV, as well as anchoring and reporting in San Luis Obispo, Calif. and Phoenix. She was one of the San Diego market’s first Latina journalists, an Emmy award-winning producer and journalist who covered the Tijuana region. She also produced morning and magazine shows about San Diego’s diverse communities and the Latino culture. In 1984, she also was a founding board member of the California Chicano News Media Association, San Diego chapter. Then, in 2001, she began a 16-year stint working in spokesperson roles with the San Diego City Attorney’s Office (2001-2008) and the San Diego Housing Commission (2009-2017). She continues her public relations and community work through Maria Velasquez Communications.

Townson’s award is named after Jim Reiman, who served for many years as assistant news director at KGTV-TV/Channel 10. Reiman was considered an unsung hero of the profession, similar to many behind-the-scenes journalists who do not have a byline nor appear on camera. When Reinman retired, the Press Club created the award to honor enlightened media managers and the first recipient was KGTV assignment editor Jack Moorhead in 1997.

St. John’s award is named after Harold Keen, who anchored San Diego’s first television news broadcast in 1949 and was described by colleagues as the dean of San Diego journalists. Keen arrived in San Diego in 1936 as a reporter for The San Diego Sun. He later worked for the San Diego Union, San Diego Magazine and KFMB-TV/Channel 8. He passed away in 1981.

San Diego State University students Katy Stegal and Amber Salas each were presented with $2,500 scholarships as part of the Press Club event. Stegal and Salas both work for The Daily Aztec, the university’s student news organization.