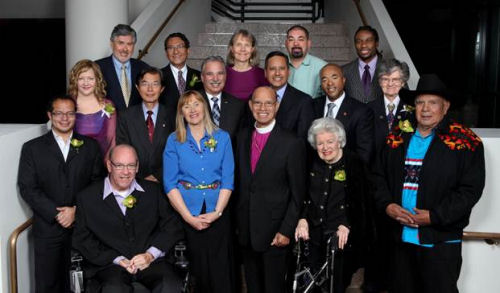 February 12, 2013 (San Diego)--On Feb. 5, 2013, Union Bank, in partnership with KPBS, honored 16 local heroes who are making a positive difference in the lives of others. The heroes were selected each month in 2012 and were formally recognized last week at the cultural diversity celebration held at the San Diego Natural History Museum.

In 1977, at the age of 19, Louis Frick became a quadriplegic as the result of an automobile accident.  Since then, the San Diego State University alum has dedicated his life to enhancing awareness and advocating for people with disabilities. He was instrumental in the passing of H.R. 5610, a bill designed to preserve balanced funding for California’s 29 Centers for Independent Living.   Mr. Frick serves on many boards and committees, including the Mayor Sanders’ Committee on Disability for the City of San Diego, the California State Independent Living Council, and the California Foundation for Independent Living Council.  He has also been a board member and elected officer for the National Council on Independent Living; the Unified Port of San Diego’s Accessibility Advisory Committee and the San Diego Disability Action Coalition and has served as a consultant for disability-related organizations at the local, state and national level.  Additionally, Mr. Frick was a member of the Host Committee for Super Bowl XXXVII, held in San Diego.

Mr. Leroy Elliott is a tribal elder and chairman of his tribe, the Manzanita Band of the Kumeyaay Nation located in San Diego. Unemployment on the Manzanita reservation exceeds 50 percent and families live on less than half of what is considered the poverty level in the United States.  In spite of these challenges, Chairman Elliott proactively seeks opportunities that provide much needed services and job opportunities for his tribe. In addition to his duties as chairman, Mr. Elliott is the treasurer and a long standing board member for the Southern California Tribal Chairman’s Association; chairman of the Southern California Indian Health Clinic; and a volunteer assistant fire marshal for the Campo Fire Department.  Mr. Elliott’s dedication to the preservation of his Native American heritage include his efforts to advocate for tribes in an effort to preserve cultural property, sacred sites, endangered species and critical habitat.  Mr. Elliot was recently asked to be one of the distinguished greeters to the Dali Lama as the world famous spiritual leader visited San Diego State University.

The honorees were announced throughout 2012 as part of the Cultural Diversity Partnership, which recognizes and pays tribute to local heroes from eight diverse communities, and the year-long celebration of diversity culminated with a ceremony and reception on February 5, 2013, at the San Diego Natural History Museum.  Recipients were formally recognized for their work that helps improve not only their local communities, but the region, the nation and the world.

“Diversity and inclusion are an important part of our Union Bank heritage, and we are proud of our Local Heroes program in partnership with KPBS that celebrates cultural diversity in our communities,” said Union Bank Senior Executive Vice President Pierre P. Habis, head of Community Banking. “The program shines a spotlight on the accomplishments of extraordinary individuals, and we are thrilled to honor them with the recognition they deserve.”

The host for the evening was Kathi Diamant, an award-winning actor, author, broadcaster and adjunct professor at San Diego State University.