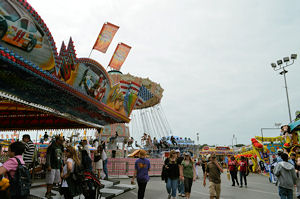 By Nadin Abbott
Photographs by Nadin Abbott and Tom Abbott
June 15 (Del Mar)--The San Diego County Fair is not just games and fun. It also includes the very serious business of judging breeding stock for cattle and other livestock. This is what county fairs used to be centered around. So going to the livestock section is a window to the past.
While at the County Fair, we watched the judging of Brangus Cattle, a breed common in the South. According to Ramona resident Wayne Glasgow, the mixture of Brahma and Angus Cattle was created in the 1950s, since it tolerates the dry and humid conditions of the Southwest (and Southeast) very well. The Brangus is ideal for our area of the country. 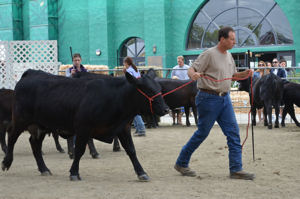 One of the important characteristics of the cattle is that they produce better meat in our harsher weather conditions.
What would judges look for in a breeding competition? They look at the total animal, as well as the way it moves, its muscularity and how it walks and trots. In females they also look at the udder, which will be critical for milk.
Glasgow won today in both the male and female categories, as well as the reserve categories. He also took both in the Ultra Blacks. He is planning to go on to the State Fair in Sacramento next month. We, at the East County Magazine, wish him success. 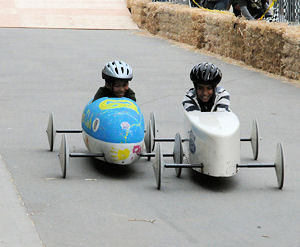 So what else is going on at the Fair? The Kiwanis Club from La Mesa is sponsoring the Soap Box Derby. This is the second year that the club has a small demonstration track at the fair, where kids can try out driving a couple of cars.
The La Mesa Club is part of the All American Soap Box Derby. Champions from the local race will move on to the National Championship at Derby Downs in Akron OH.  The La Mesa Club can be found here: http://lamesasoapbox.com/
There are other things to do, such as watching pig racing, viewing crafts, playing games and enjoying carnival rides. 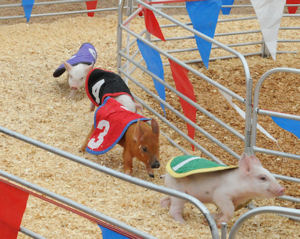 When you do get hungry, and you will with all the walking, there is plenty of food to fit almost any palate. It ranges from classic Americana such as barbecue, to Greek and Mexican offerings, as well as kebobs, and of course ice cream, funnel cakes and other sweet treats.
For more information, visit www.sdfair.com.  The fair runs through July 4 and is open Tuesdays through Sundays.