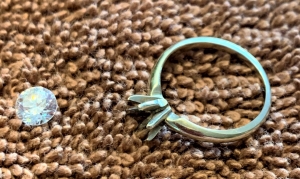 March 16, 2021 (El Cajon) --- It takes a village to find a lost diamond. Such is the case with an El Cajon woman, Michelle Marks, who lost a round, one-carat diamond stone valued at $3,000 while walking her dogs in the Fletcher Hills area.

After Marks posted about the loss on a Nextdoor neighborhood forum,  70 people posted comments, some offering help--and one neighbor found the stone. That gifted hunter was Tiffany Johnson.

Johnson doggedly pursued finding the lost diamond that had become dislodged from Marks’ engagement ring--a ring that Marks’ husband, Eddie, had proposed with 27 years ago.

Marks, who has now been married for 26 years said, “My husband was so relieved and happy.”

Johnson says she saw the post about the lost diamond on Thursday, March 12, two days after it was posted. “She included a map of the route she was on while walking her four dogs when she lost the one carat round diamond out of her engagement ring. She was understandably upset as this was the ring her husband proposed with,” Johnson told ECM via email.

“I discovered that I lost my diamond after walking my four dogs thru the neighborhood,” she said. “Tiffany found the diamond, in my street about four houses down.  She found it four days after I lost it. It took four days, but I received responses on Next Door immediately and so many people in the neighborhood were helping to look for it.”

“Managing  four leashes is always a challenge,” she said on how it happened. Marks discovered the loss while folding clothes after the walk.

Johnson not only took one route on her quest to find the diamond, but two.

“I decided to take my daily walk on the east part of her route on Tyrone Street (the El Cajon part of Fletcher Hills) and looked carefully but found nothing,” said Johnson. “The next day, Friday, I decided to walk the west half of her route on Silvery Lane. I was thinking of how nice it would be to find it for her when I saw it on the asphalt.”

Even after finding the stone Johnson had to stay on the case to return it.

“I posted that I found a stone on Silvery Lane. I then went to someone I know who lives on that street and asked if she knew Michelle Marks (her name was in the post),” said Johnson. “She said it was her next-door neighbor. I knocked on her door and was greeted by her teenage son. I said I thought I had found his Mom's stone. He called his Mom and we talked on Facetime. I showed her the stone and she confirmed it was her diamond, so I left it with her son. She seemed beyond thrilled and thanked me profusely. She offered me a reward, but I really didn't want anything monetary. Her excitement brought me such joy!”

Nextdoor is a social media platform for neighbors and locals to connect.

“She asked to come by on Saturday and thank me in person,” said Johnson. “I was so happy to meet her and pre-COVID we would have definitely hugged. She brought me a bouquet of gorgeous roses as well as a thoughtful gift card.”

Johnson felt a personal connection when she learned of Marks’ loss. “I lost a diamond from my engagement ring 22 years ago, but it was never found,” she said.

But her son had better luck—and an amazing recovery-- after he lost property. “A few years ago, my son was very sad to lose his new GoPro in the ocean shortly after getting it. A couple weeks later it was found and returned to him by a Good Samaritan.”

Johnson hunted earnestly for another woman’s lost diamond and found what, unfortunately, she did not experience with her own lost ring. Still, she persevered to help another—a truly good neighborly act that helps restore one’s faith in humanity.