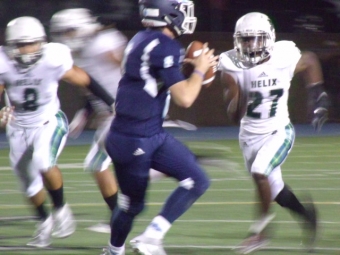 October 19, 2018 (El Cajon) - Unbelievable that it’s late October already, but we’re already on week nine of the prep football season and ECM Friday Night Lights is at Granite Hills for what should be a high-scoring matchup between the undefeated-in-league (5-3 overall, 3-0 league) Scottie Dawgs from Helix and the undefeated-in-every-sense-of-the-word Eagles (8-0 overall, 3-0 league).  The winner of this game is crowned the Grossmont Hills Championship game winner. 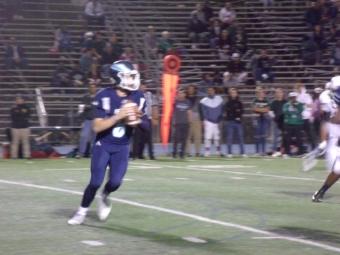 After a quiet but fun first quarter, Highlander junior Elelyon Noa kicked off the second with a burst through the secondary for a 28-yard touchdown run to give Helix a 7-0 lead.  But remember that scene in Monsters, Inc. where Mike is talking about the dinosaur and says “the guy takes five steps and he’s there”?  That’s what Granite Hills did on their next possession.  Actually, it was more like three steps.  A big run and a big trick pass play set up the Eagles at the goal line, where senior quarterback Cristopher Ostreng passed to sophomore wideout Henry de Leon in the end zone for the game-tying touchdown.  On the next drive, Helix senior quarterback Daniel Amon said “that’s cute, Cris.  I can do that too” and aired it 26 yards to junior wideout Tim Christopher in the end zone and the Highlanders took the lead again, 14-7.  That was fine until Ostreng decided to one-up Amon with 14 seconds left in the half with a short pass to junior wideout Jacob Setterberg in the end zone to tie the game at 14 going into the half. 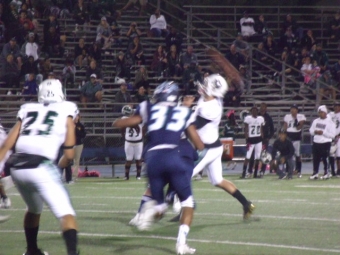 Helix picked up right where they left off in the second half with Noa’s three-yard touchdown and the pattern continued as the Scotties led 21-14.  Helix extended their lead for the first time of the night when junior quarterback Delshawn Traylor kept it for the 19-yard score.  The Highlanders led 28-14.  A drive later, Helix interrupted your regularly scheduled programming to bring you the Elelyon Noa Show.  His huge 67-yard run from the Highlander 27 set up his two-yard run into the end zone to put Helix up by three scores, 35-14.  Tonight, the Noa Show featured guest appearances by Traylor and Amon, as Traylor intercepted the ball (yeah!  He’s a cornerback too!) and Amon ran it in for the score and Helix just kept on scoring, leading 42-14 after three. 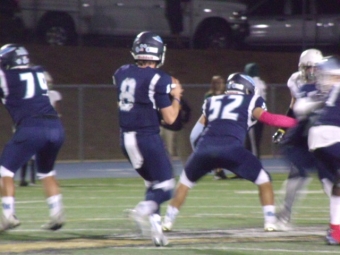 The Eagles tried to stage a comeback in the fourth when a long pass from Ostreng to Setterberg set up Setterberg making the catch again in the end zone for a touchdown.  The Highlanders led 42-21.  Amon didn’t like that and on the next drive, he aired it to junior Kamryn Brown who ran it in for the score.  The Highlanders led 49-21.  Senior running back Joshua Shields got a chance to carry the ball as he added the dagger; a six-yard touchdown run to give Helix the 56-21 win and hand Granite their first loss of the season.  They fall to 8-1 overall and 3-1 in league.  Helix moves to 6-3 overall and stays undefeated in league, moving to 4-0 and winning the Grossmont Hills Championship.