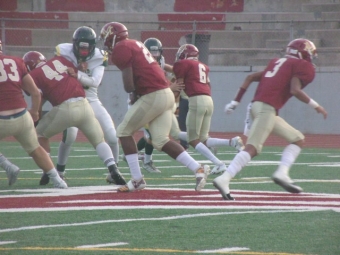 August 31, 2018 (Spring Valley) - Chugging along, week three of ECM Friday Night Lights takes us to Spring Valley for the first time in 2018, where the Monte Vista Monarchs, led by their explosive senior running back and SDSU commit Jahmon McClendon, took on the Patriots of Patrick Henry, who are coming off an embarrassing 43-0 loss to Morse last week.  McClendon scored five rushing touchdowns in the Monarchs’ 48-21 win over University City last week.  You might recall this matchup from last year, when ECM Sports reported on McClendon’s five rushing touchdowns that beat Patrick Henry 34-27.  This year, however, McClendon wouldn’t let the Pats even touch the Monarchs.

The senior back wasted no time at all.  A minute into the first quarter, McClendon charged all the way downfield for his first rushing touchdown of the game to put Monte Vista up front.  A few minutes later, senior quarterback Kenny Stevens threw it all the way downfield to senior tight end Blake Schmidt for another Monarchs touchdown to go up by two scores, 14-0, after one. 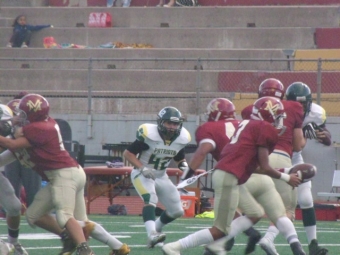 McClendon christened the second quarter appropriately with his second rushing touchdown of the game and Monte Vista was quickly leaving the Patriots in the dust.  McClendon scored touchdown number three for the hat trick after another miserable Patrick Henry drive, rushiing 46 yards downfield for the score.  A drive later, we don’t even have to tell you who scored Monte Vista’s fourth and his fourth rushing touchdown at this point because you can probably guess as the Monarchs went up by four scores.  For the fifth Monarchs TD, McClendon took a break and let fellow senior back Elshaddai Levi punch it in at the one, but McClendon already secured four rushing touchdowns by the time the half was out to put Monte Vista up 42-0 heading to the locker room. 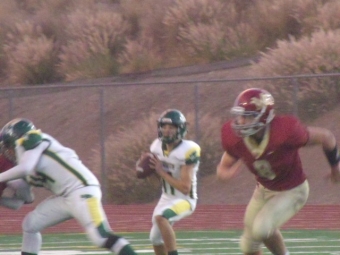 McClendon and the Monarchs didn’t totally silence the Pats, however.  The third quarter was scoreless, but in the fourth, the green and gold defense stood tall at the goal line and stuffed Levi in the end zone to finally get on the board.  Towards the end of the game, the Patriots went junior to junior as quarterback Matthew Castillo connected with Bryce Johnson for the score, but the Monarchs made fast work of the green and gold thanks to McClendon’s four rushing touchdowns, winning 42-9 and staying undefeated on the young season, moving to 3-0.  The Pats are the opposite, winless so far as they move to 0-3.

The Monarchs will face another set of Patriots from Christian High at Granite Hills next week at 7:00 p.m.  The Patrick Henry Patriots, on the other hand, head out to El Capitan to face the Vaqueros next Friday at 7:00 p.m.