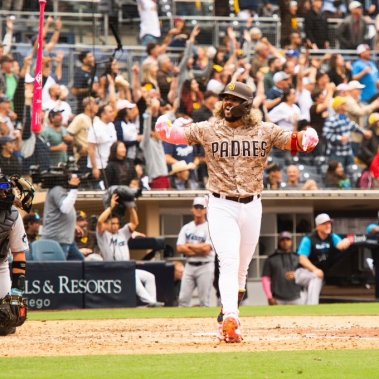 Photo:  Jorge Alfaro's walk-off homer in the ninth gave the Padres the series win. Via @padres on Twitter

May 8, 2022 (San Diego) - Last night was a horrible loss, but today is Mother’s Day, so the Padres really wanted to give Mom a good game today.  Trevor Rogers started for Miami against Grossmont High alum Joe Musgrove.

The Marlins started first again with Garrett Cooper’s sac fly in the fourth that scored Jesus Aguilar and the Marlins led 1-0 after four.

Jazz Chisholm Jr. added on with a solo homer in the sixth and the Marlins led 2-0 after six.

Everything looked done for.  But then, Jorge Alfaro saved the day in the ninth with a three-run walk-off bomb and the Padres took three games from the Fish with a 3-2 win.

The Marlins finally leave and are replaced with the Cubs.  Game one of a three-game set is tomorrow at 6:40 p.m.  Kyle Hendricks starts for Chicago against MacKenzie Gore.