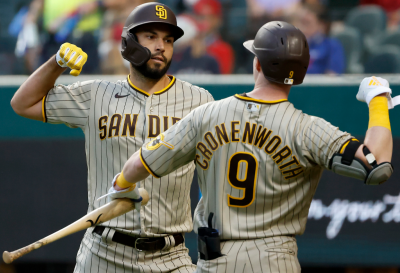 By Liz Alper
Photo via @padres on Twitter
April 10, 2021 (Arlington, Texas) - After the high of the monumental night the Padres had last night wore off, it was time to get back to work tonight in game two against the Rangers with Chris Paddack on the mound against Jordan Lyles for the Rangers.
Apparently, the Padres partied too hard last night because they fell quickly.  In the second, Eli White tripled on a sharp line drive to left to score Jonah Heim.  Isiah Kiner-Falefa followed that up with a two-RBI double that scored White and Anderson Tejeda and the Rangers led 3-0 after two.
But the Padres caught up in no time, starting in the fourth with Eric Hosmer’s solo homer.  Tommy Pham hit a sac fly to center to score Wil Myers and the Rangers led 3-2 after four.
In the fifth, Ha-Seong Kim, who made the final play in Joe Musgrove’s no-no last night, launched his first big league homer; a solo shot to left to tie the game at three after four.
Ryan Weathers came in to replace Paddack in the home half of the fifth and gave up a solo shot to left to Kiner-Falefa.  The Rangers were back on top 4-3 after five.
Two innings later, Trent Grisham got on one knee, but instead of proposing, he golf-swung and launched a two-run homer to right for his first home run of the season.  After Josh Sborz came in to pitch, Manny Machado doubled on a long fly ball to center to score Jurickson Profar and the Padres led 6-4 after seven.
In the eighth, Kim reached first on an errant throw to first that was bobbled by Nate Lowe, allowing Jake Cronenworth to score and the Padres took a 7-4 win in game two to move to 6-3 in the NL West.
UP NEXT
The rubber game of the series will be at 11:35 a.m. tomorrow.  Adrian Morejon starts against Mike Foltynewicz for Texas.
NEWS