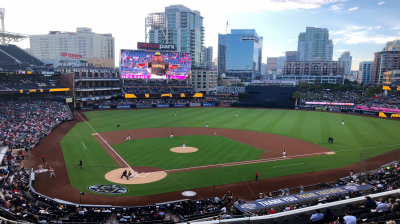 June 28, 2019 (San Diego) - The Padres swept the Orioles and now it was back to Petco Park and to the NL  for the weekend as the Cardinals came to town. Michael Wacha started tonight’s game one for St. Louis against Eric Lauer.

In the fourth, the Padres almost got out of the inning when Wacha hit a grounder up the middle.  Fernando Tatis Jr. made an outstanding diving play, but the throw to first was ruled not in time after a review.  Yadier Molina scored and the Cardinals led 1-0 after four.

All looked lost until the sixth until Tatis Jr. got another chance to save the day and did with a line drive solo homer to right to tie the game.  Hosmer gave the Padres the go-ahead run with a homer to center. Back-to-back homers gave the Padres the 2-1 lead after six.

The Padres added one more on Hosmer’s sac groundout in the eighth that scored Wil Myers and the Padres took game one with a 3-1 win.