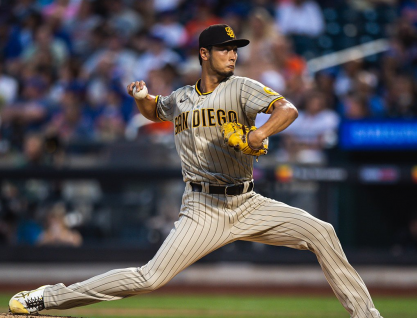 By Liz Alper
Photo:  Yu was fire in the first game back, going seven innings and nine strikeouts.  Via @padres on Twitter
July 22, 2022 (New York) - Now that ECM’s draft coverage of the Padres is over, it’s time to jump right into the second half of the season.  The Padres kicked it off with a weekend in the Big Apple against the Mets.  Yu Darvish starts against Max Scherzer for New York.

We were scoreless until the fourth when Eric Hosmer hit a two-run homer and the Padres led 2-0 after four.

After a Mets pitching change, Trent Grisham hit a solo homer in the seventh.  Jake Cronenworth scored, but the Mets got on the board in the home half with a double from Luis Guillorme that scored Jeff McNeil, but the Padres started the second half off strong with a 4-1 win.
UP NEX
Game two is tomorrow at 4:10 p.m. and will be part of MLB.tv’s weekend free game package.  Blake Snell starts against Chris Bassitt for New York.