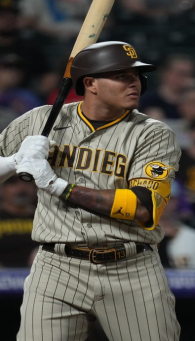 By Liz Alper
Photo:  Manny Machado hit a home run tonight.  Via @padres on Twitter
July 11, 2022 (Denver) - The Padres figured it was best to leave home for a while after getting destroyed by the Giants for the last two days.  They went to Denver for four games with the Rockies.  Sean Manaea started tonight against Jose Urena for Colorado.

The Padres kicked things off with a sac fly from Luke Voit that scored Jake Cronenworth and the Padres led 1-0 after one.

Cronenworth added on with a leadoff home run to right in the third and the Padres led 2-0 after three.
The Rockies got on the board with C.J. Cron’s sac fly that scored Charlie Blackmon in the fourth.  The Padres still led 2-1 after four.
Manny Machado got his groove back in the seventh with a solo homer to deep left, but Randal Grichuk countered with a solo homer of his own in the home half to the same spot and Manaea’s night was done.  Nabil Crismatt came on and finished the inning and the Padres held a slim 3-2 lead after seven.
But the Padres pulled away and C.J. Abrams made his presence known in the eighth with a three-run bomb to right.  The Rockies tried to rally in the home half with an RBI double to right by Jose Iglesias that scored Blackmon and the Padres led 6-3 after eight.
Connor Joe tried to rally for the Rox in the ninth with a big double off the left field wall that scored Grichuk.  Blackmon hit a double to right that scored Joe, but the Padres escaped by the skin on their teeth with a 6-5 win.
UP NEXT
Game two tomorrow is at 5:40 p.m.  Mike Clevinger starts against Austin Gomber for Colorado.
TRANSACTIONS