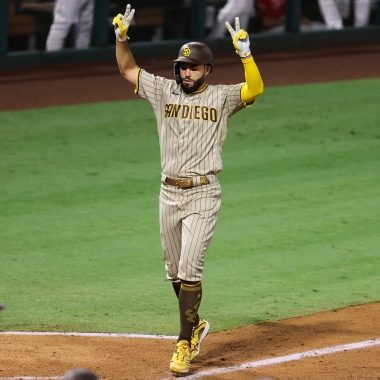 Photo: Eric Hosmer hit a three-run homer in the eighth inning. Via @padres on Twitter

September 2, 2020 (Anaheim) - After a day off, the Padres were back to interleague play with a series against the Angels.  Dinelson Lamet started tonight’s game one against Julio Teheran for the Angels.

The Angels started things in the third when none other than Mike Trout hit his 13th homer of the season to center field, good for two runs and the Halos led 2-0 after three.

But in the fourth, Jurickson Profar saved the day with a two-run blast to right field to tie the game.  But in the home half of the fourth, another Angels big bat, Albert Pujols, doubled down the right field line and scored former Padre Justin Upton and the Angels reclaimed the lead 3-2 after four.

Profar tied the game in the sixth with a sac fly to score Manny Machado and it was 3-3 after six.

And in the eighth, new Padre and ex-Angel Jason Castro lined a double to right center to score two runners and the Padres took the lead.  The Angels brought in Hansel Robles, who was a trainwreck on the mound and eventually walked Fernando Tatis Jr. with the bases loaded.  Castro scored.  Machado hit a line drive single to left that scored two runs and Eric Hosmer hit the dagger; a three-run homer to straightaway center and the Padres led 11-3 after eight.

The Angels tried to rally in the bottom of the ninth with Andrelton Simmons’ RBI single that scored Jared Walsh, but the Padres put a stop to it and were able to save game one in a big way with a huge 11-4 win.